Those of you who know me well may wonder why I haven’t featured Geek God Nathan Fillion before. Well, he was one of the first I looked up when I thought of this weekly feature, but I couldn’t find a picture of him holding a book other than a Richard Castle book. 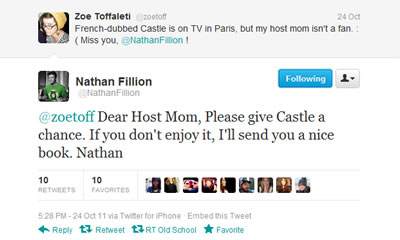 Fortunately my kick-a$$, ninja searching skills have improved since, and I was able to find these lovelies for you. Also, I will try my darndest not to go all fan-girrl. Okay, deep breath.

For those who don’t know who he is, he played Capt. Malcolm Reynolds in the cult TV show Firefly. As you might have noticed from my blog’s logline, I’m a huge Browncoat (fan base’s name). I’m one of the small legion of fans that watched the TV show when it aired. Of course, I followed this charming and talented actor’s career since. Currently, he plays mystery/crime writer Richard Castle on the ABC hit TV show Castle. He’s also the only Hunk Who Reads whom I’ve had the pleasure of meeting. I used to be the organizer of the annual charity screening of Serenity for the city of Atlanta, part of the global Can’t Stop the Serenity event, and one year at Dragon*Con, he was gracious enough to donate and sign two autographed photos (I’d only asked for one) for the silent auction. He was every bit as friendly and charming as you’ve imagined. 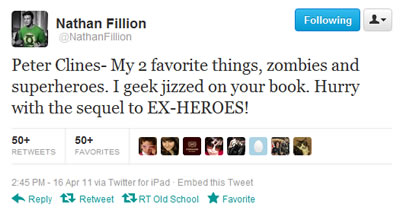 In researching his reading tastes and habits, I think I’ve hit upon why it’s so difficult to find pictures of famous men reading when I know they read–they probably own eReaders! It makes sense, traveling as much as they do. But, makes it dang hard to find snapshots. This is the case with Fillion; he’s a big fan of the Kindle and even tweeted someone to buy one to save money and trees.

Okay, on with the fun! Last summer at Comic Con, he revealed he was reading George R. R. Martin’s A Game of Thrones: A Song of Ice and Fire: Book One

. During this period he posted this humorous tweet (anyone who’s seen him and/or Alan Tudyk at fan conventions know they love to rib each other): 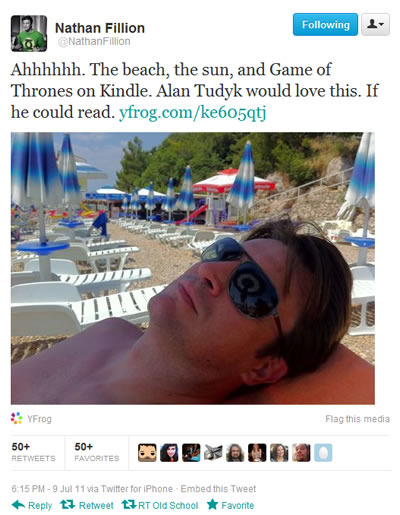 He must have read through the series pretty quickly, because then in October he tweeted the following, which made me giggle when I first saw it then, and still does: 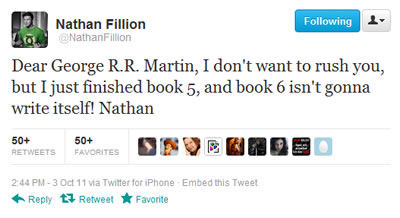 Fillion’s parents were English teachers and instilled in him the importance of literacy and a love of books. When his friend PJ Haarsma published his first book and heard that kids wanted it in their libraries but librarians couldn’t afford it, Fillion and Haarsma founded (clutch your pearls, girls) the non-profit organization Kids Need to Read (KNTR) in 2007. The Foundation encourages literacy and social responsibility through its gifts of inspiring books to schools, libraries and literacy programs serving disadvantaged children.

In 2009, in an edition of USA Weekend, he talked about his volunteering efforts with KNTR and what makes it worthwhile. He said:

If you can teach a kid to read, he can do anything.

Last October, he tweeted a promo for KNTR where if you purchased the anthology Every Witch Way But Wicked

, proceeds would benefit KNTR. (Just a note here: I think this was a temporary promo for Halloween). And in true Browncoat fashion, a group of fans have been holding fundraisers for KNTR since 2010. In this one poverty-stricken elementary school in Chicago, the funds were used to purchase books, and the kids drew their own book covers of their favorites.

So, what is this book his friend did? The Softwire: Virus on Orbis 1

and Haarsma got him to do an audio version of the first three chapters. Here he is recording: 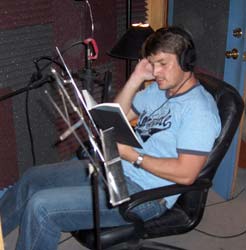 In 2009, Haarsma had a signing at a Barnes & Noble for Haarsma’s book, and Fillion and Alan Tudyk came for support and to promote KNTR. Here’s a pic of some fans and Fillion with a rain stick (it’s a Firefly thing):

The American Library Association featured him in their READ poster program: “We’re thrilled to have Nathan Fillion on our latest READ poster. He’s shown great dedication to engaging young readers with exciting books,” said Rachel Johnson, director of ALA Graphics. “Word of the poster’s debut traveled fast, and members, particularly YA librarians, are clamoring for it.”

In the poster, he is holding Haarsma’s book: 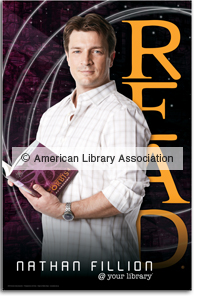 Last March he was at the 2nd Annual Milk + Bookies Celebration at the Skirball Cultural Center in Los Angeles, California. Some photos from that event. 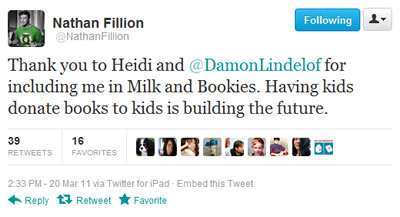 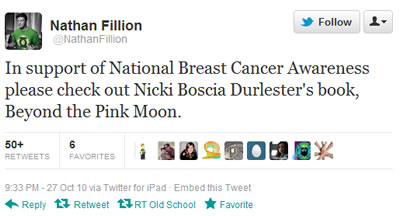 . During National Breast Cancer Awareness month he asked folks to read Nicki Boscia Durlester’s book, Beyond the Pink Moon: A Memoir of Legacy, Loss and Survival

. And here’s a swoon-worthy photo of him holding a baby at a bookstore!
Some fans have started their own Hey Girl meme featuring Fillion: 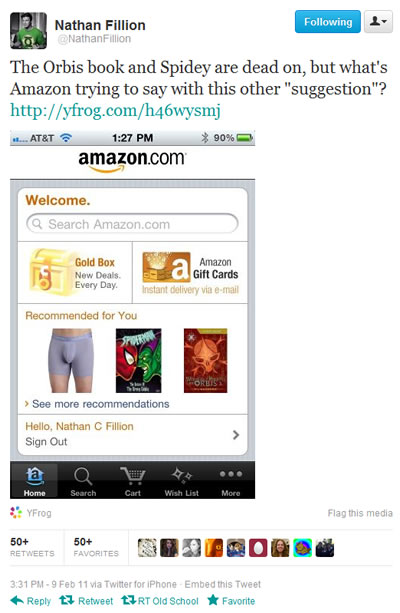 Want more, you can follow him on Twitter! I’ve been following him for quite a while now, and it’s well worth it. He even posts scavenger hunts in different cities. One day, I hope to be photobombed by him. One can dream, right? Just saw that TV Guide named him one of the Top 30 celebrities to follow on Twitter.

UPDATE: Memory-like-a-steel-trap commenter ‘rre’ dug up some dragon*con footage from 2008 where someone from the audience brought up KNTR and asked each panelist to name their favorite book. Quick-witted Fillion used the opportunity to say Of Mice and Men:

“It goes to show that as great as it his to have a goofy, comically lovable character in a story, they inevitably have to die,” and looks pointedly at Alan, making allusions to Wash’s death [Tudyk’s character in the movie Firefly/Serenity].

video cuts off in the middle of his discussion of the book, so here’s the rest:
[youtube http://www.youtube.com/watch?v=P9N-DUpyhug]

Firefly fans might be interested in the short series of blog posts I did back in the fall that featured writing lessons from the show, called Firefly Friday.

So that’s this month’s Hunk Who Reads. If you like these articles, please comment. They’re fun to write, but are time-consuming 🙂 — on that note, if you run across any photos of hunks reading, please let me know.

Come back next month to see the next Hunk Who Reads…

Past Hunks Who Read/Related Articles: