I woke up at 9 on Thursday instead of 8 (still trying to recover from jet lag) only to see I had an email from someone I’d contacted about getting a boat tour and he said the only time available that day was at 11 AM and I was over an hour away!

So I quickly dressed and scoffed down breakfast and hit the road, arriving with ten minutes to spare, but that time after breakfast is when I normally compose these emails. I brought along my tablet and keyboard to hopefully catch up at lunch but internet was spotty. I’m sorry!

So to back up–the day before (Wednesday) was actually a repeat of stuff I shared on Day Two, because I decided to go back to Dunadd and take some 360 photos (now that I’d figured out how that works, LOL) and while there noticed things I hadn’t before–maybe because I wasn’t constantly going OMG?

Anyway, I took scads more pictures and this time drew a better outline that included the lower tiers (the first time I just did the upper ones) and in sketching the first tier I explored how far it stretched and noticed it had a much gentler slope up to the third tier, bypassing the dramatic, but steep entrance. I also noticed some other approaches they could have used too, so it gave me a better idea of how they might have used the space.

See more photos of Dunadd and a video

From there, for some reason, I figured I’d go to Ardfern on the Craignish peninsula so that I could get a look at the opposite shore (which would be Dunadd’s shoreline). I don’t know why I thought the characters would build a watchtower north up the loch, but I’m still jet lagged, I guess. Anyway, it was a bust for research because a) they wouldn’t have built one there and b) I couldn’t see the shore anyway because of the intervening islands. But, personally it was a nice little jaunt that brought me to the abandoned medieval chapel of Kilmarie. 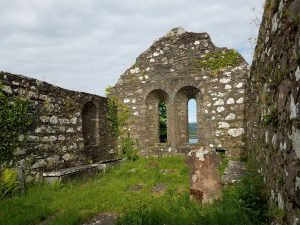 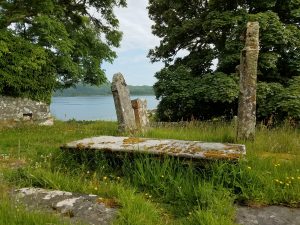 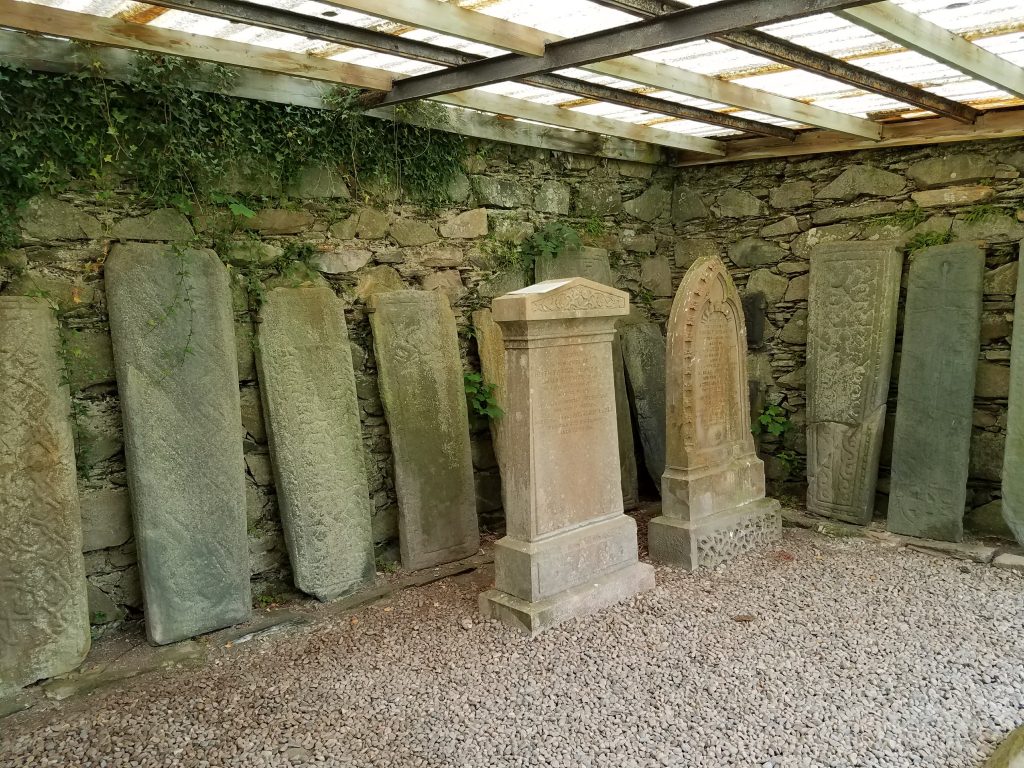 See rest of photos of the Craignish Peninsula

Day Five brought the boat trip and the reason for the missed email! I wanted to go by water on part of the journey my characters would have taken (they journey by water from Dunadd area to the Antonine Wall). Also a storm comes and they need to seek shelter so was hoping to find the type of formation I’d need for that along the coastline.

My captain–Donald–was entertaining. He even served us a cup of tea! The scenery was gorgeous, but then it is Scotland. I also slathered on the sunscreen because we were again graced with another sunny day. I found out it wasn’t just this week of this unusual weather, but three weeks of sunny days! I never thought to bring sunscreen here, LOL, so I had bought some the night before. Found out the village we set out from (Tighnabruiach) borders the estate where none other than Robert Louis Stevenson grew up and we passed a layered confection of an island–moss, rocks, rhododendrons in bloom, and trees–which Donald said was the inspiration for Treasure Island. 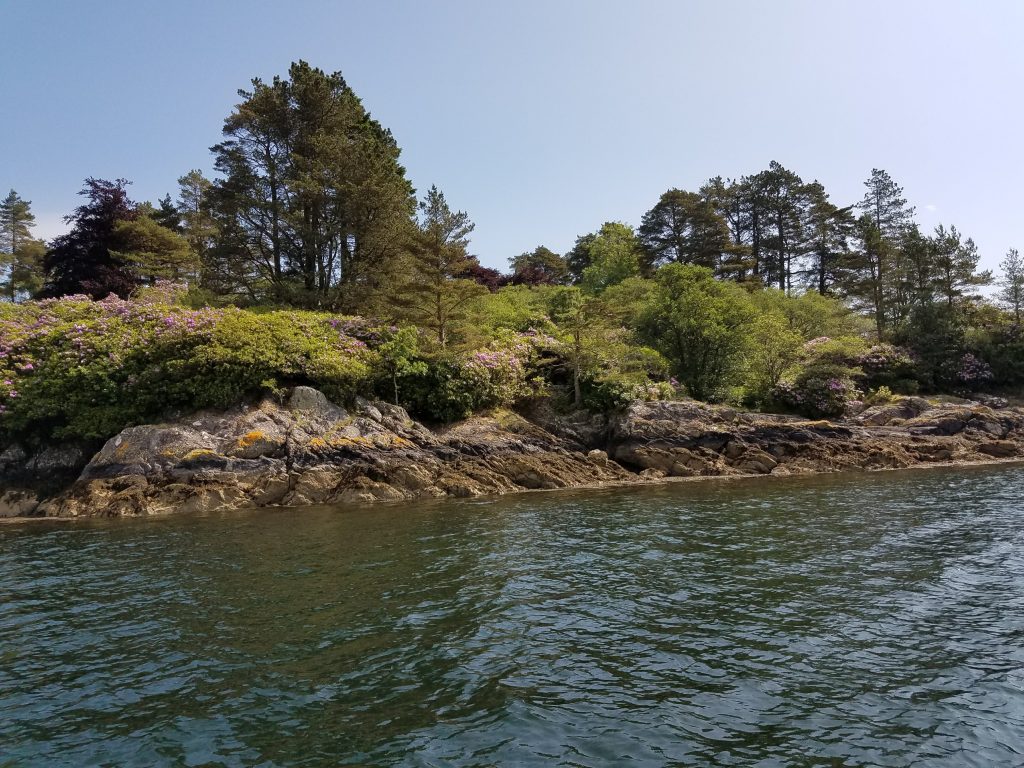 When we reached the north tip of the Isle of Bute and the islands there, we saw seals lounging on the shores. The lighter colored ones were four-month-old pups.

While I didn’t quite find the shelter I wanted, the experience was amazing, and Donald told me some more information about the local area that would help with writing the scene. He also told me about the car ferry from this peninsula to the one Dunadd is on, saving me about an hour or more driving the tiny roads.

So off I went to Portavadie to my first experience in riding a car ferry! 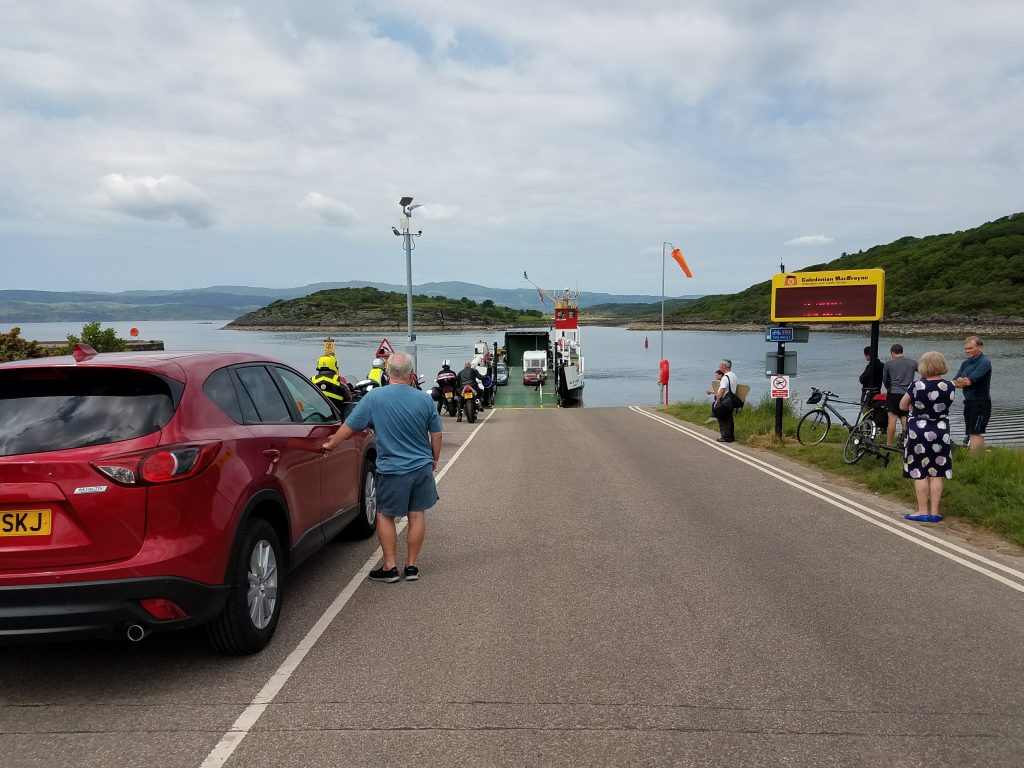 Mindless Wandering and then searching for fictional location

Donald also told me there was another boat tour in Tayvallich and a quick Google search gave me a start time of 2 PM. So I rushed there but arrived 3 minutes late. But from talking to the guy in the general store there, I would have needed to arrange it ahead of time. Starving, I ate lunch there at the cafe, and it was a beautiful spot in their bay. 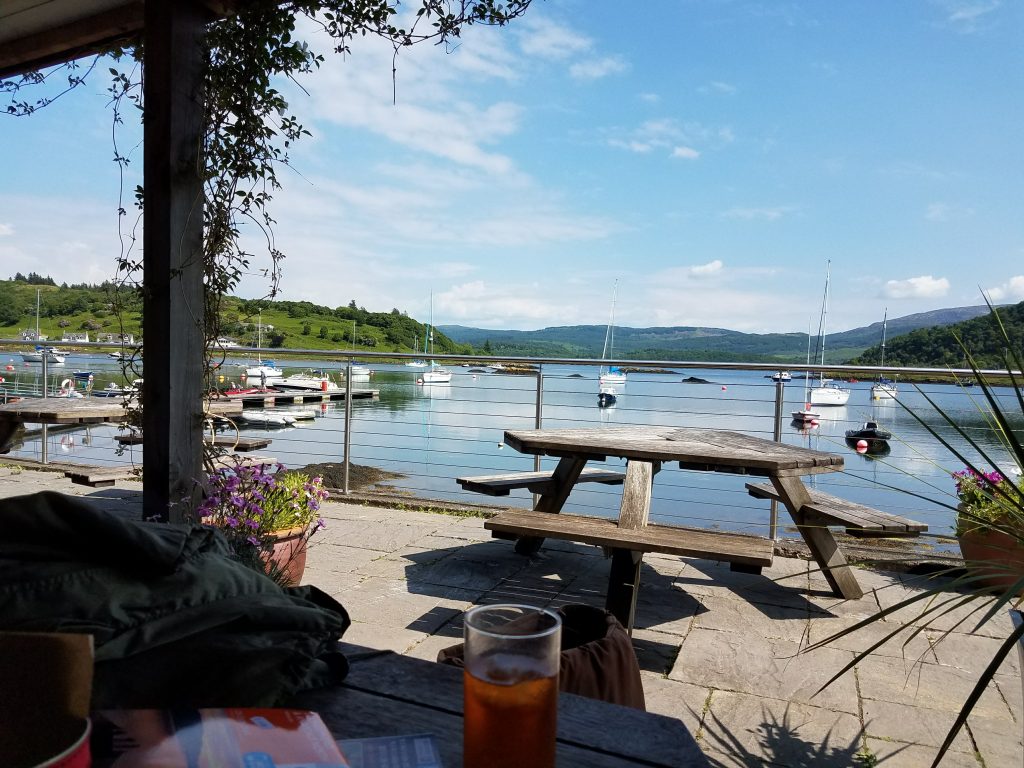 I also had another problem I tried not to panic about–I only had about 30 miles left on my tank and the closest gas station was in Lochgilphead. I’d make it, no problem, but it meant I couldn’t gallivant far. I decided to go to nearby Crinan to see if I could get a clearer picture of the Dunadd coastline (where I should have gone the day before instead of the Craignish Peninsula). My characters build a watchtower to help warn them of raids coming from the direction of Ireland, and when I pulled up at the Crinan Canal parking lot, I saw a perfect hill for it. I wished I could climb up there, but satisfied myself with a partial walk down the canal to get an idea of the shore they would have walked along in one scene. While on the walk, I saw an arrow for a nature trail leading into Scotland’s rain forest (who knew!) and so I thought at the very least it would be an interesting jaunt while I was here and maybe I could have the characters see it or something. Well, I was in luck, because instead the trail went up that same hill and so I ended up being able to search for my watchtower location after all. And Holy Amazing Scenes, folks! Lots of expletives were voiced aloud when I saw the views when I reached the top!

This walk had everything–moss-covered rocks, twisty trees and twisty paths, which would then occasionally break into the open sun and breathtaking vistas. Then you’d dip back into the shady forest. I could easily picture faeries here. Or hobbits, LOL.

So even though it was a hectic start to the day, and then a little aimless feeling around, it ended up being another fantastic and rewarding day!