It’s the first of the month, and in an effort to get my old Hunk posts scrubbed of copyrighted material, I’m pulling up this one that had been taken offline and fixing it. So this month, it’s Ryan Gosling! He’s definitely a reader as there’s some photo documentation:

Is he keeping the tattoo though?

Tangentially related to reading, is his recent participation of Funny or Die’s Drunk History reading of A Night Before Christmas, also starring Eva Mendes and Jim Carrey.

It was hard finding out about his reading habits because of a certain meme we’ll explore below, but I did find out he was diagnosed with ADHD as a child which caused him to have trouble reading. He obviously conquered it. From that same article, he reveals this about Hard-Boiled Wonderland and the End of the World

, by Haruki Murakami: “You can’t put it down. All these movie studios are trying to buy his books and he won’t sell them.”

I gave up trying to find more about what he likes to read, however, because searching on Google for it was just too crowded with this phenomenon:

For some reason only the meme gods understand, he’s the subject of a number of “Hey Girl” internet memes that started with F*%kYeahRyanGosling where posters pretend he’s their boyfriend saying supportive/sexy things. There’s now a bunch of them (for computer nerds, museum lovers, political junkies and many more) but the ones that relate to books I couldn’t resist sharing. This one for librarians, got a giggle from me:

And then one about reading YA books and I had to share this one because this seems to be the theme lately with my writing friends and me (*now going to post this as the blog post pic for my last writing post on internal dialog*):

And one where we pretend he’s in the world of publishing: 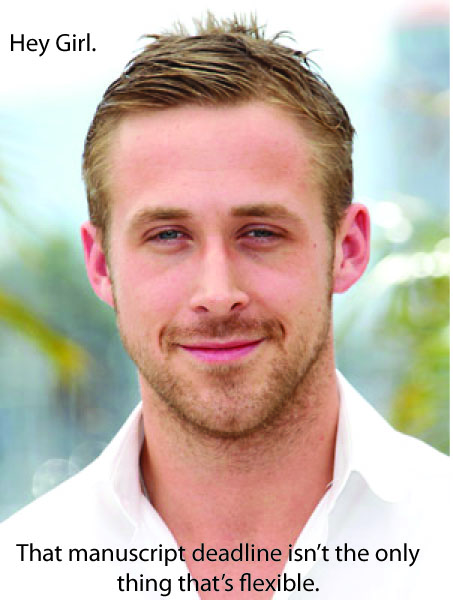 So that’s this month’s Hunk Who Reads. Reading is sexy people!

Come back next month to see the next Hunk Who Reads…

Past Hunks Who Read/Related Articles: