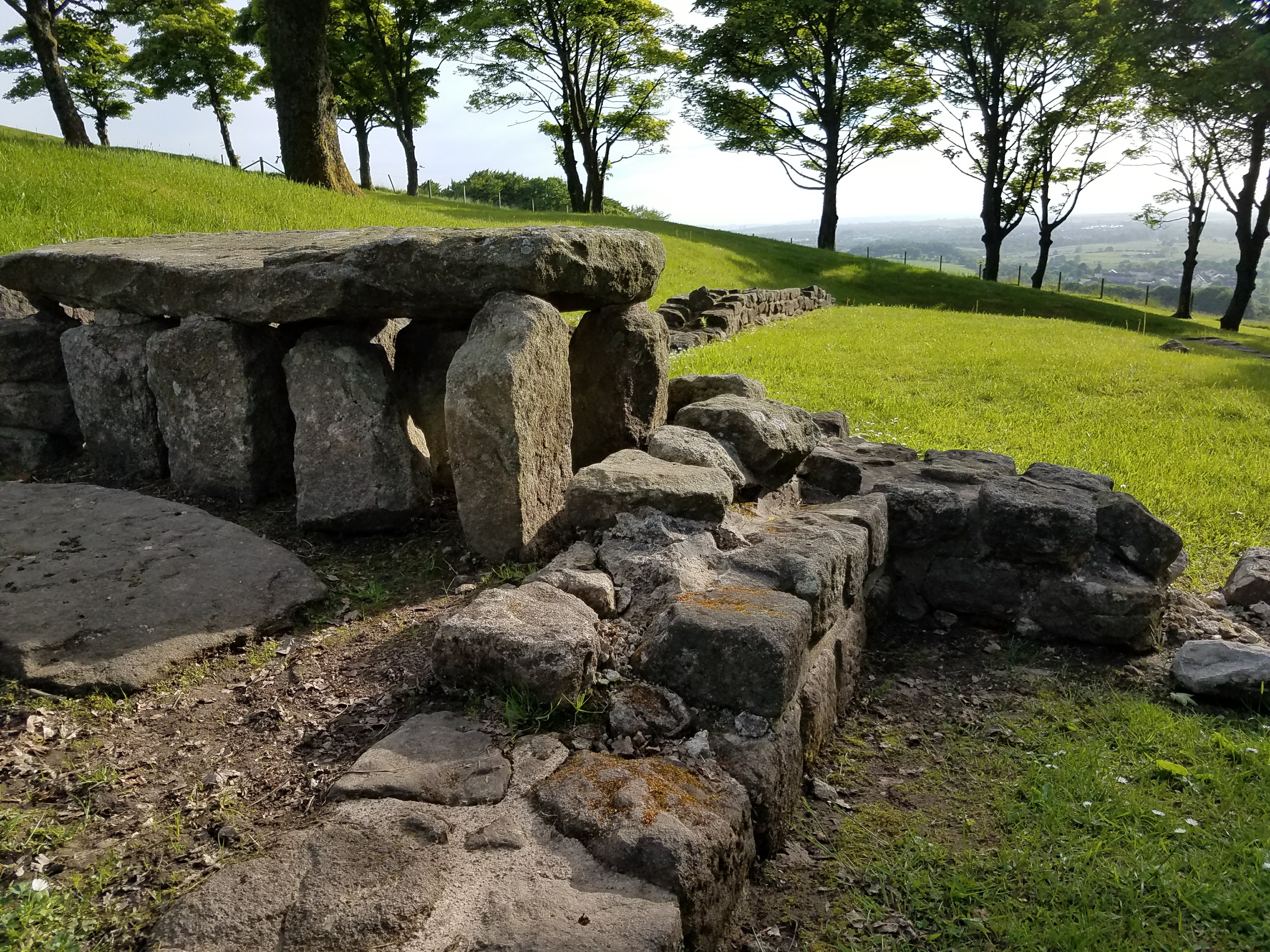 Traces of the Antonine Wall

Tuesday, I decided to head back down the A82 toward Glasgow to see other Roman ruins since my characters will walk along the wall and visit not only Old Kilpatrick, but also Bearsden fort along the wall.

I’d read that Clydebank Museum had Roman artifacts, so I headed there first, only to find that the exhibit was now about the Singer sewing maching. Not quite the era I was looking for 🙂

So I headed next to a spot about 15 minutes away that said it had “Roman ruins in this green space” on Google maps. The GPS brought me to a spot between 2 houses in a subdivision, but no marker or arrow existed along the road to tell me where to go next. I park anyway and walk up a brick set of stairs between two houses, hoping I’m not violating some private property. At the top, I turn with the worn path and find a historical marker for the wall and vague directions that parts of the wall lie farther east. So I trek along and find nothing. I gave up and as I headed back I see an iron fence off to the left behind a profusion of bushes and trees. The thing is totally hidden and there’s barely a worn path through the grass leading to it. Hoping this was my destination I followed and found about a dozen stones in a line surrounded by the fence, but still no marker. So I’m guessing I can check off seeing the Roman ruins at that location? While the rocks were more than I saw at Duntocher, at least there they had signage and the grass was marked with the outlines of the fort. Here there was no real impact or acknowledgement of the Roman presence other than the old sign. 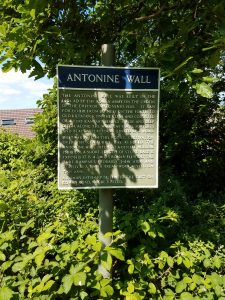 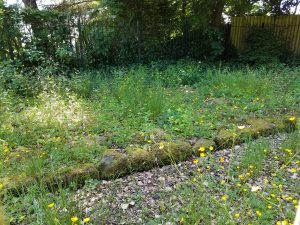 From there I drove the short distance to Bearsden and the bath house. It’s behind a modern apartment/condo complex and facing a street. This one is well marked off and the surrounding neighborhood reverberates with its ancient history–the complex behind it is called Roman Court and across the street is some other endeavor called Antonine and the road alongside is called Roman road. It’s set off by a low, brick fence and amply marked.

By now the sun is out in full force in otherwise rainy Scotland and the ruins are bathed in the light. It was a spectacular day! This is the most complete Roman site along the wall, I believe–I’ll have to check. Anyway, it was amazing seeing the vestiges of the walls, the benches where Roman soldiers sat, as well as the drains and heating system they used. My characters will have a scene in this building, so I diligently marked down layout and paced the dimensions and photographed the heck out of it. 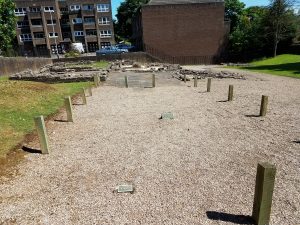 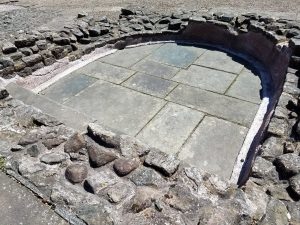 Looking down the length of the bath house from the entrance (which doesn’t have any remains and is marked by posts); the cold bath. 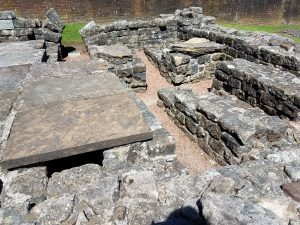 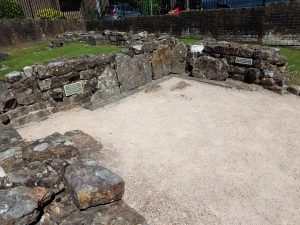 The Hot Dry Room–note the raised floor which allowed heat from the furnace to circulate and warm the room; the Hot Room, which is where my characters will have a scene. It too would have had a raised floor. Note the slabs leaning up against wall–those were also laid in a way to have room behind them to circulate hot air.

See more photos and a video

Next, a short stop away from there, was New Kilpatrick Cemetery which had two sections of the wall visible. It was easy to find the first, but the second wasn’t so easy–thanks to Google maps I found it (though I suppose if I’d driven around the whole place I would have eventually!)

Much more intact than the ones I’d seen so far–I was able to see a full layer as well as the distinct trace of the culverts cut through them for water drainage.

I did some quick research and found this museum not too far away and since it was still early–around 3 PM–I headed there. So glad I did! Great local history museum with state-of-the-art displays and best use of a small space I’ve ever seen. Most of their artifacts were given to the Hunterian (and so I’d seen them on Sunday), but it was still an informative display. Plus they told me that there’s a Roman reenactment this weekend at Dunbarton castle! How perfect is that? They also recommended I see Bar Hill fort.

See photos from the museum

So after a late lunch, I headed farther east. I parked my car at the mouth of the walk, and hiked up the sharp incline about a half a mile to the site, which sits on a lovely green hill high up over the valley and shaded by large trees.

Here there were extant pieces from the headquarters as well as a bath house, with the caretakers filling in the rest of the outline and providing signage. There was also a trace of the wall down hill. 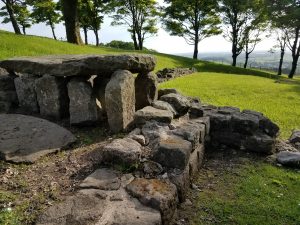 Part of the bath house

What a day! Saw way more than I thought I would, and being able to see the outlines of the bath house where the characters will be, plus an example of a headquarters (they won’t be at that one, but at the one in Bearsden) was invaluable. And the views! Stunning!

On the walk around, I found one of the painted rocks people leave, so after some debate, I picked it up. I’ll find out if they want me to rehide it in Scotland or in the US. 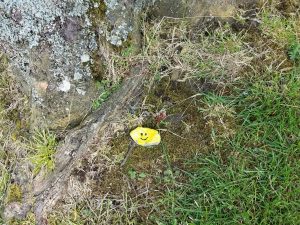 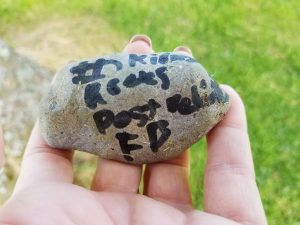