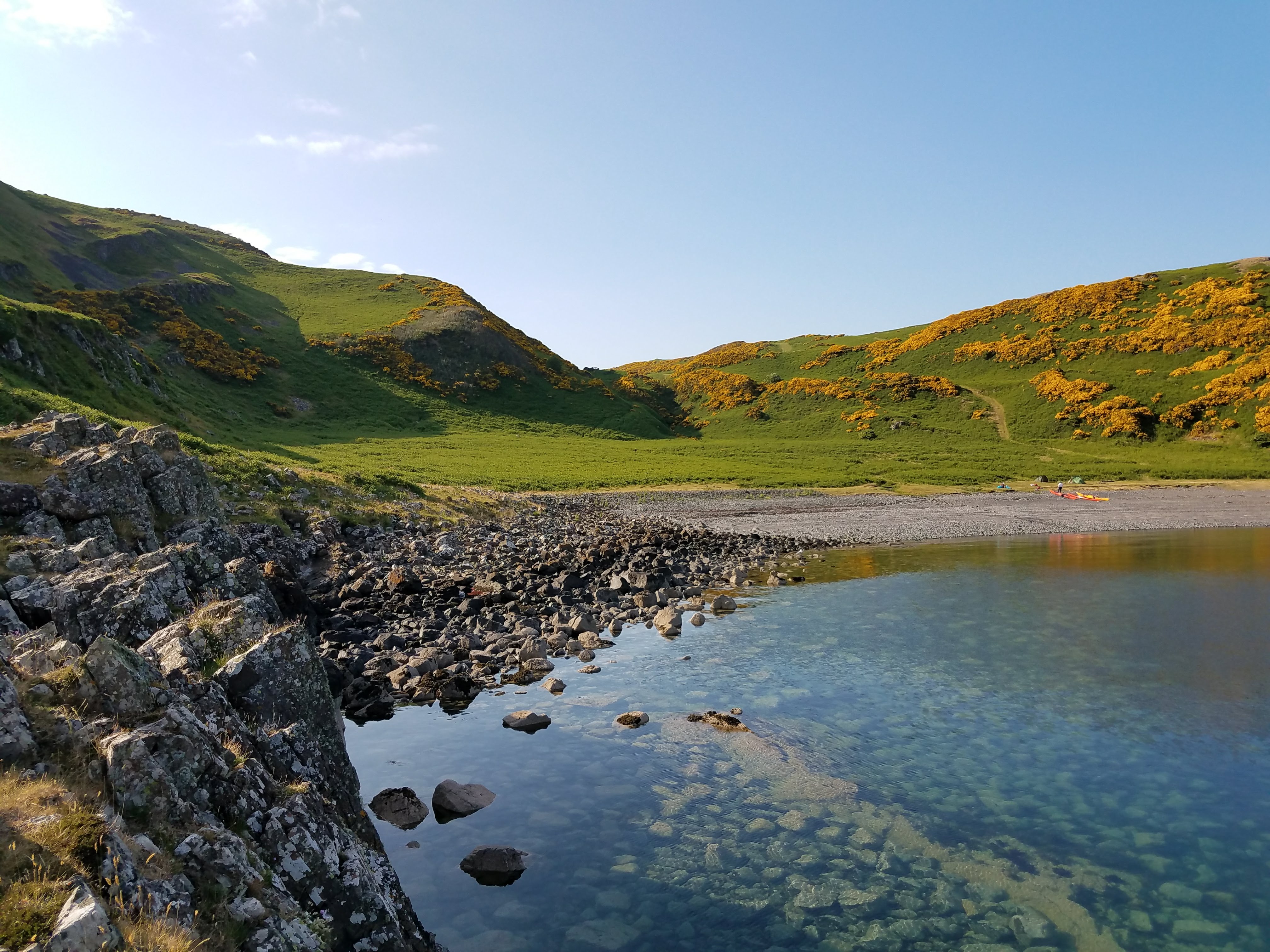 Friday I didn’t hit the road until 1 PM. Destination: Isle of Bute. I still hadn’t found a good shelter from a storm for my characters during their boat trip from Dunadd to the Antonine Wall and in looking at the map, it looked like the south tip of Bute had some narrow inlets that would be perfect. So off I went to the ferry at Colintraive.

However, I very nearly became involved in a 3-car pileup. I was going down a two-lane road and some car was driving across it. He was taking up the other lane but wasn’t yet in mine and I thought he’d stop. But he didn’t, he just kept on going with me almost on top of him! I couldn’t brake in time, plus there was a car behind me that wouldn’t be able to either, so I swerved into the side of the road which had a groove. It was so close, I kept thinking the whole time I was going to scrape his car, etc. I somehow maintained control of the car and bumped it back onto the road! Up ahead was a pull-over area, so I stopped and the car behind me pulled in too to make sure I was okay and generally share in the OMG-WTF-was-the-dude-thinking. I checked my rental car and all looked ok and the guy suggested I look under too. All seemed well, so we headed onward.

Being a super-pro now at the whole ferry thing I pulled on and took the short ride across to the Isle of Bute. It’s so short of a ride they don’t even raise the ramps all the way up.

Then I just took whichever road took me along the shoreline, bravely ignoring the call of exploring Rothesay or the sign for Mount Stuart, an ornate Victorian palace, basically, built for the 3rd Marquess of Bute. See what I do for the sake of research? 🙂

The roads eventually brought me to Kilchattan Bay and the end of the road. Seeing that there was a nature trail that would take me near where I wanted to go, I grabbed a late lunch at a little cafe there and then started my hike around 4 PM. Immediately, the landscape was even more dramatically gorgeous than the bay itself and what I’d seen leading up to it on this isle. Some kind of geological formation that made rocks crack or form into long rectangles, some volcanic black, and pocked with yellow lichen and pools of green algae. Tons of places too, for my characters to shelter but not quite what I had envisioned yet, so I kept going. At one point, a friendly English pointer bounded up to me and kept me company as if we were old buds.

Its owners eventually caught up and we chatted until they turned off at the end of the main trail. I kept going on the smaller trail, snapping pics left and right. 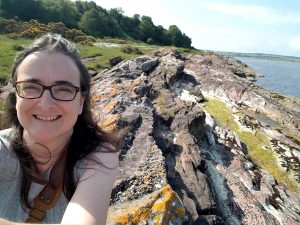 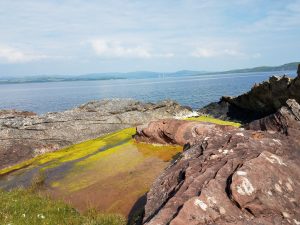 I eventually reached the tip and went around the hill and was greeted by an amazing vista, which unfortunately didn’t translate well into pictures because the sun was directly in front of my phone. But it was a small bay with a gray-sand beach, crystal clear water, complete with a lighthouse and rugged hills topped with green grass and yellow flowers. It could work for my scene, but the bay was wider than I’d written. 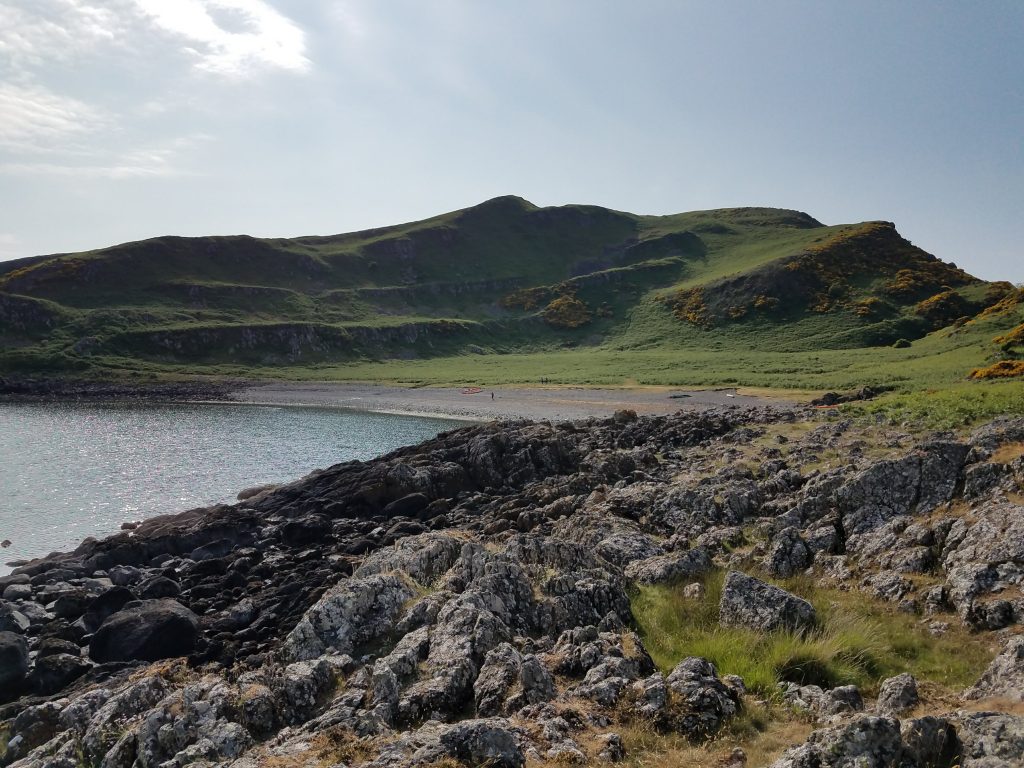 I took the trek around the beach, where some campers had just beached their boats and were setting up tents, and around to the far hill, which revealed another small inlet which would work even better. I hiked as far as I could go and really wanted to go around that bend, because the next inlet looked to be the perfect size for my scene, but there wasn’t a path, and being alone, I didn’t want to risk twisting an ankle,or worse, and not have help.

And I felt the same rightness I felt when I explored the Coral Beaches last year for a scene in Must Love More Kilts. This was it. It had the small beach head I’d written, a cliff with enough of an indentation to shelter them a little, and that cliff blocked the westerly winds! There’s some scene adjustments I’ll need to make, but I’m also going to see if I can find pictures of the next little inlet because it might be exactly it. At any rate, it gave me enough of an idea of the landscape there to work into the scene. And, holy moly, what a gorgeous spot it was!

I facebook messaged my two Alpha readers, showing them the setting and put my phone away. I then heard some strange sounds and talking and it turned out I’d video called them when in my messenger bag! So the three of us chatted on the south end of the Isle of Bute until I went out of range again.

That hike to the end of the line took 2 hours, and it took me another 1.5 to get back, leaving me 1.5 hours to get back to the ferry before I was stuck on the island–plenty of time! 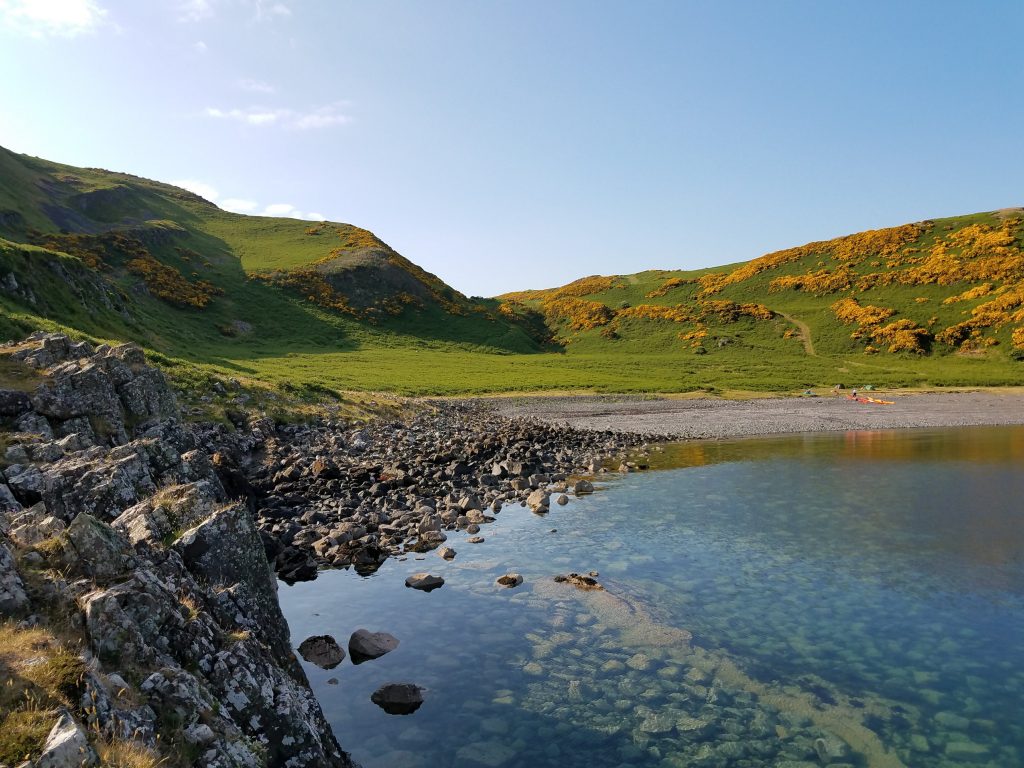 (Sorry I didn’t have more in this email–connection is slow today and failing to upload. This also means that the above link won’t have all of them right away, so check back later, especially for the videos)

So I headed back, but didn’t detour in case that ate up unexpected time, even though the scenery was stunning still, as I wove through the farmlands. But yesterday seemed kinda like my close-call day because as I was nearing the approach to the ferry a small deer tried to commit suicide by car by leaping right in front of me! I braked hard and swerved, narrowly missing him!

I was glad when I finally made it back to the hotel, but man, I was so beat I barely wanted to freshen up and grab dinner. But I did, only to find out the only pub in town stopped serving food at 9 PM (I got to the hotel just after 9). So I went into the general store and bought a sandwich and “crisps”. One example of many of their odd-ball flavors here! 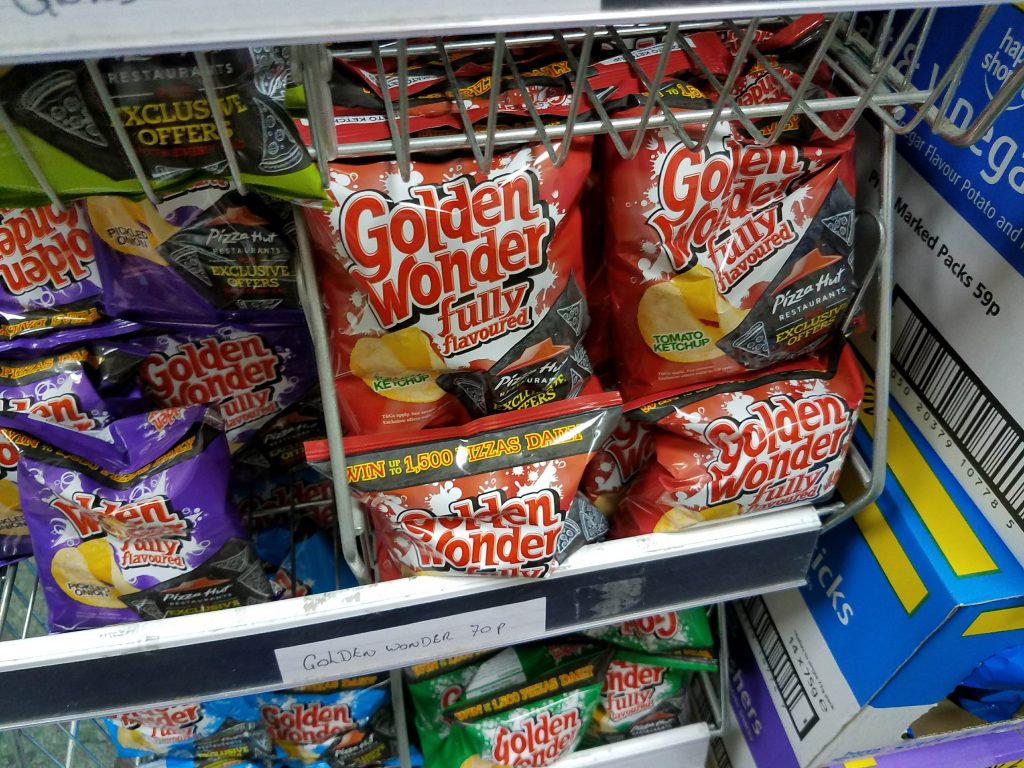