British actor Dan Stevens is our topic for this week, and nerdy ladies are you in for a treat! Best known for his roles as Edward Ferrars in the 2008 adaptation of Sense and Sensibility, and as Matthew Crawley in iTV’s Downton Abbey, this hunk is an intellectual. The picture above is his promo pic for the Carte Noire Reader series, where he reads love scenes from classic and contemporary novels. On his bio page for this endeavor he has this to say about books:

I adore books and love reading, but it’s hard to find the time. Life is a bit hectic this year – I just got married, and now we’re expecting a baby, and then there’s the play every night. I’m getting through Richard Holmes The Age of Wonder at the moment.

He then goes on to say: “My other dissertation at Cambridge was comparing The Picture of Dorian Gray to Will Self’s Dorian – so I know the book well – it’s beautiful.” Excuse me while I catch my breath.

Okay, back now: your OTHER dissertation? Yep, turns out he was an English Literature major at Cambridge.

Anyway, here’s the list of books he’s read from for the Carte Noire program. He’s definitely making a name for himself in audiobooks too, with his reading of My Dear I Wanted to Tell You: A Novel

, which won UK’s national book award for best audiobook of the year. Here he is excited about the win: 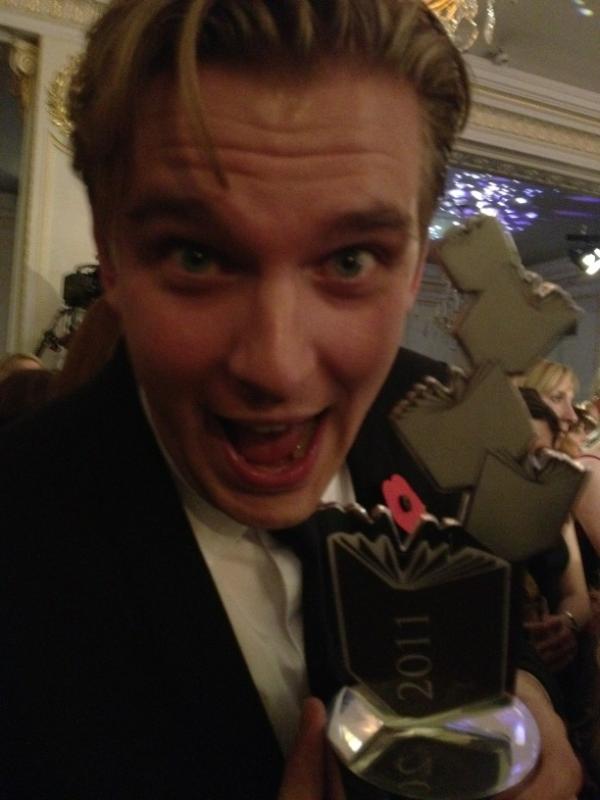 He’s the voice for several other books, but how cute is he reading Jack and the Beanstalk?

He is Editor at Large of the online literary salon The Junket which launched this past fall. The Spectator had this to say about the startup:

Set up by friends for friends, all the essays in this virtual literary salon revel in extremely well written flights of fancy — read the meditation on Ukrainian airplane food; about the art of memorising poems for impromptu performance or how Guardian reviewer James Purdon thinks covert culture in the Cold War is still relevant. It’s more duffle-coat than polo-neck.

He writes a column once a month for The Telegraph — in the December issue he discusses how his bookshelves are already groaning from the weight. Non book-related but of interest to his fans, is how he laments the passing of old-school romance… And, he has a secret ambition: he wants to write a novel.

Last month it was announced that he will be one of the judges for the Man Booker prize for fiction.

Here’s what I could find on books he’s read

In an interview last month, he says that the last great book he read was  Patti Smith’s Just Kids

, which he says is  a love letter to his favorite city in the world.

He read John Lewis-Stempel’s book Six Weeks: The Short and Gallant Life of the British Officer in the First World War

And, be still my heart, he’s reviewing books. Here’s a quote from his review in the Times of Caitlin Moran’s book How to Be a Woman

Man-made scales of ‘fitness’ or ‘hotness’ have been wildly confused with those of beauty… As an actor, you continually see the ridiculous additional pressures heaped on actresses to ‘look right’ when actually what the camera sees when it spies the ‘great actress’ – what distinguishes them, and indeed the ‘great woman’, from her peers – is not on the surface at all. It is what illuminates the love-light in every man, whether he knows it or not. It’s that little spark behind the eyes; an intellectual curiosity, an erotic imagination – and just maybe a knowledge of early Nineties indie and dance music

You can also find him on Twitter talking about Downton Abbey, of course, but also chiming in with thoughts on history, books and even “there’s nothing sexier than rhetoric. fact.”

And here’s a photo of him at the Cheltenham Literary Festival, Oct 9, 2011

Due to just the sheer awesomeness of his love of books and his brainy side, I hereby bestow this post with the following accolade:

Before I wrap up, I want to thank Historical Romance writer Merry Farmer for alerting me to the fact that he has a sexy brain! Thanks Merry, I had fun doing this!

EDIT: Mere minutes after I posted this, he posted an article to The Junket, Bloodlust on Safari.

So that’s this week’s Hunk Who Reads. You can find him on twitter at @thatdanstevens. And ladies (or gents), before you get any ideas, in case it slipped by you in the beginning of the post, he’s married 🙂

Come back next Monday to see the next Hunk Who Reads…