Note: Stay tuned to the end for a giveaway!

To all outward appearances today, as I put out my second full-length novel, this is me at the start of this GIF, trying to be all cool and stuff, and then at the end, that’s me on the inside! This poor story had a rough start and I’m so excited to be able to finally share it.

I originally wrote it in May of 2012, all excited about the steampunk world I was imagining in Mobile, Alabama in 1890 and was eagerly revising it when I signed with my agent, who quickly shot it down, saying steampunk was dead. When New Adult started gaining in popularity, I tried to tell her this was New Adult, but it didn’t grok until a year later and then she wanted to see it right then, and I’d stupidly set it down and never revised it, so it wasn’t at all ready for my agent to see it. I delved into revisions and sent it out to Betas, but when I got them back I was also getting burned out and took a break from writing, so when I finally picked it up again last year, my agent wasn’t as keen to see it, which served me right. And then we amicably parted ways.

I had it in my head, even after I decided to self-pub Must Love Breeches, that I would seek new representation for Steam, but then luckily a lightbulb went off when I realized I didn’t have to shop it first. I looked at it objectively–did I love the story and hope others would too? Yes. But was it something that was sooooo commercially appealing NY would want it? No. I’d missed the boat on steampunk and according to what I was hearing from my agent and others, New Adult (from a NY perspective) wasn’t interested in NA that wasn’t contemporary, and after coming off of several years of waiting to see if they’d pick up Breeches, I just didn’t want to wait on something I knew they wouldn’t want. This doesn’t mean I won’t pursue a traditional deal, and I do have a project that’s in revisions that I think might stand a chance, but there was no sense putting Steam in the long queue for the inevitable rejection. This isn’t meant to be negative or sour grapes. On the contrary, I found it rather freeing, as it gave me options, which I love, and I think if one is to be successful, one has to look at one’s work in an objective, business-like matter. That’s what’s so great about indie publishing, as we’re able to fill a need for books of our flavors, but which aren’t in high enough demand to make it a viable business proposition for NY to take a chance on–NY can’t make a living catering to niches, whereas indies can.

So Steam got more revisions and Beta rounds and it went off to a developmental editor, who had fantastic feedback and made it much better (Thanks Jessa Slade!). Then it was off to my copyeditor, who I was really excited about bringing it to the next level. But luckily, I gave a launch date to Amazon that was a month later than I anticipated having it ready, because several days after it was due back to me, and I’m wondering what’s happening, I learn she’d been struck down by the flu, poor thing! So it was a mad scramble to find a replacement that could give it a good edit during that first week in December and Julie Glover did me a solid, thank you!

So what’s the deal with Steam?

I forgot to do a blog reveal of the trailer I made a week or so ago, so here’s the visual for ya:

Jack the Ripper might be in town. But is marriage more terrifying?

In an alternate Deep South in 1890, society reporter Adele de la Pointe wants to make her own way in the world, despite her family’s pressure to become a society wife. Hoping to ruin herself as a matrimonial prospect, she seizes the opportunity to cover the recent Jack the Ripper-style murders for the newspaper, but her father’s dashing new intern suggests a more terrifying headline—marriage.

Dr. Phillip Rawley’s most daring exploit has been arriving at his new home in America in a hot air balloon. A tolerable sacrifice, if it means he can secure the hand of his new employer’s daughter in a marriage of convenience. But Adele works, she’s spirited, and she has an armored pet monkey running her errands. Not only does she not match his notions of a proper lady, she stirs up feelings he’d rather keep in tight control.

With Adele hunting down a headline and Dr. Rawley trying to protect and pursue her, a serial killer is spreading panic throughout Mobile, Alabama. Can Adele and Rawley find the murderer, face their fears, and discover true love?

I’m trying something new with this launch, and that’s pricing it at 99 cents for release week, so if you’re at all interested, pick it up before Monday, as it will go on it’s normal price of $3.99. Have no idea if this will help get it more exposure and find its audience, but I figured it was worth a try.

I’ve made some image quotes, which you’re free to pin or share: 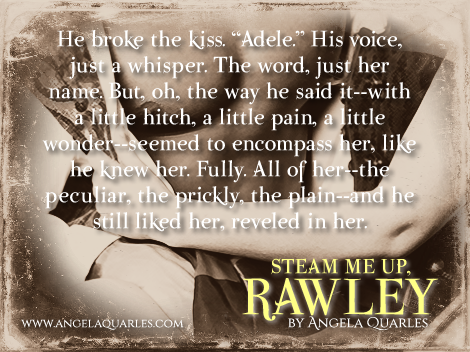 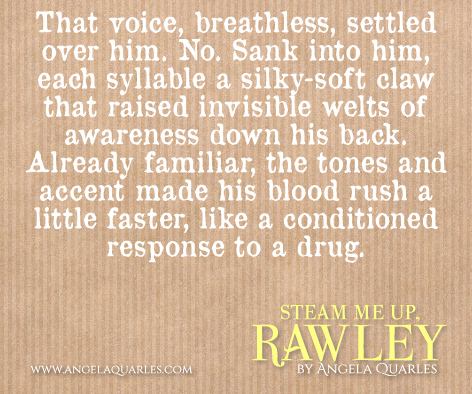 Here’s some tweets, if you’re so inclined. Just click on the image or the text and it will prefill it for you:

Tweet: It’s release day! Jack the Ripper might be in town. But is marriage more terrifying? STEAM ME UP, RAWLEY http://ctt.ec/buPlQ+ 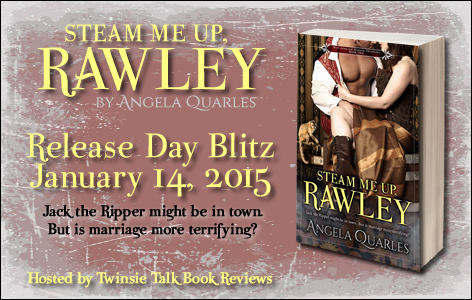 Over 20 blogs are part of my release day blitz tour hosted by Twinsie Talk Book Reviews (thank you, Angie!) and some will be doing reviews, if all goes well. Also, there will be a 3 chances to win an ecopy of both Breeches and Steam over on twinsietalk.com! Here’s the tour participants:

Thank you bloggers participating in the blitz, and thank you to all who’ve followed me on here over the years and have supported me–the online writing community is truly amazing! This is me poking my head against the internets and saying:

I set this all up last night so it’d be ready to publish when I woke up, and I forgot the buy links!

3 Replies to “Release Day for STEAM ME UP, RAWLEY + Giveaway!”