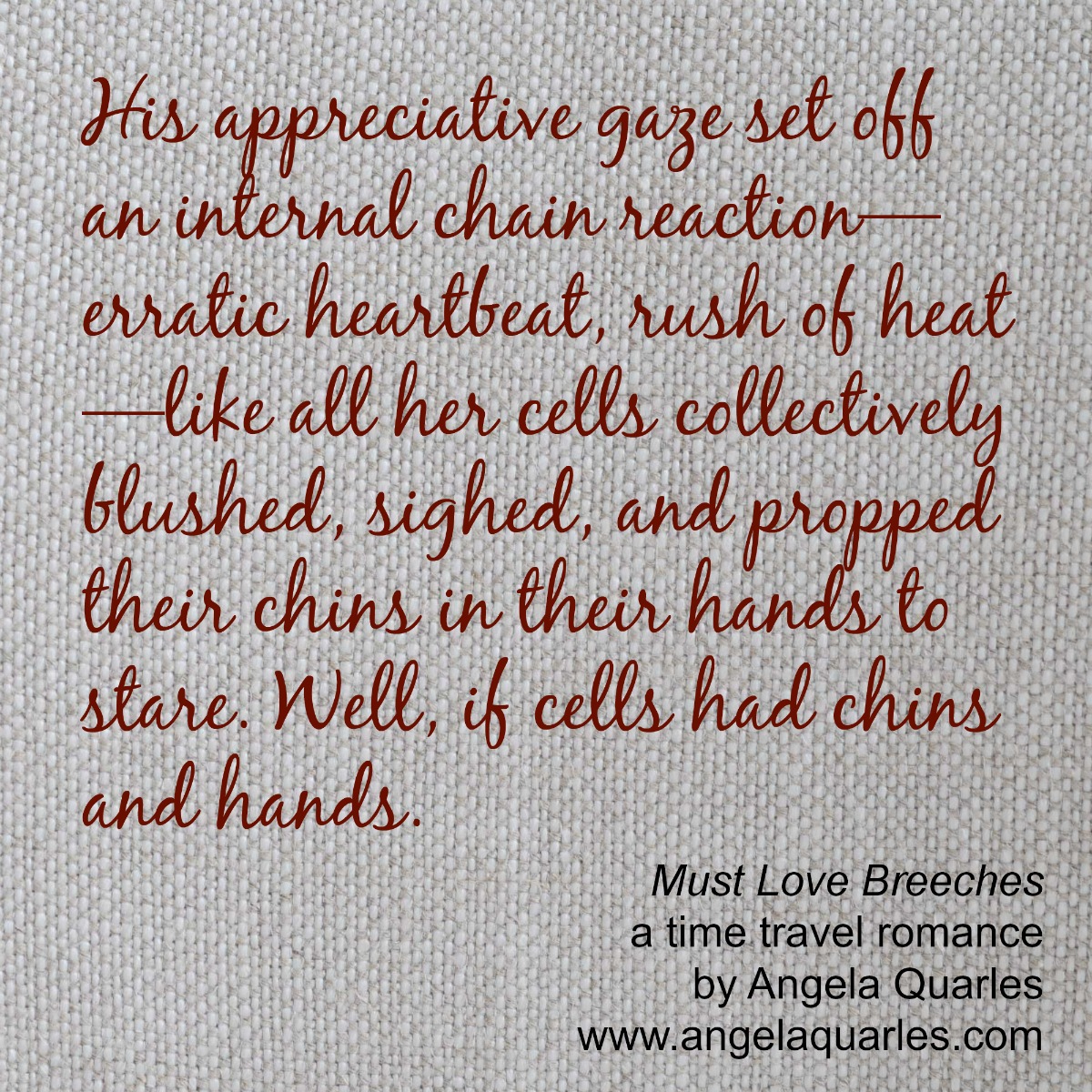 Participants post an excerpt from any work that celebrates that tantalizing moment when two people want to kiss, but don’t, or almost kiss. Sometimes it can be sexier than a full-on kiss.

I’m going to bring you an almost-kiss from my debut novel release Must Love Breeches: A Time Travel Romance. Here the hero and heroine are in a closed carriage and the heroine is trying to screw up the nerve to be brave and initiate intimacy, and she’s not quite sure if it will work. Warning: Only read if you like to have your palm and arm kissed and find that sexy 🙂

Okay, just do it.

She reached up to touch his scar. Man, her hand shook a little, but too late to turn back now.

His eyes darkened, the hazel one almost matching the brown one in color. Interesting. The space between them, so large, the time it took for her hand to reach him, embarrassingly slow. Oh, Lord, and she was leaning at an awkward angle toward him. To remain steady, she put her left hand down on the seat.

Finally, the gloved finger of her right hand reached his face and traced a path to the cleft in his chin, a feature on any man that made her want to go ‘Rowr!’

He was not. Doing. A thing. He only stared back. God, where was that black hole? So much for trying to take control, pushing past her fear.

She closed her eyes and let her hand drop, swallowing her mortification. Her breath hitched—something warm grazed her upper arm, while a hand grasped her wrist. Her eyes flew open. His fingers paused for only a moment as they delicately passed by her elbow’s inner curve.

Shivers flitted through her body and erupted as goose bumps on her skin. When had that body part become so sensitive?

The light touch of his fingers brushed down her gloved arm and slowly enfolded her hand in his. He turned it slightly, so her palm faced up, exposing the soft part of her arm. When the warmth of his lips met the tips of her fingers, her breath caught.

Somehow she’d moved closer to him on the seat, and as she gazed at his lips, transfixed, he moved his head lower and kissed her palm. His head moved a fraction and he placed another soft, tender kiss on her wrist. Her fingers curled inward.

No one had ever done this to her.

She couldn’t tear her gaze away from his slow progression. His delectable mouth moved up her arm with soft kisses until it reached the end of the glove, right below her elbow. He paused. His warm breath caressed her skin, raising more hairs across her body. What would he do next? Then, his lips touched her bare flesh for the first time, just on the inside of her elbow.

Heat seared around her chest and speared downward. Where had all the air in the carriage gone? Her head—fizzy. Their breathing filled the coach, heightening, joining, wondering. An urge to push him back against the seat and jump his bones gripped her.

Slowly, he raised his head. What would those painstakingly tender lips feel like against her own? She moistened her lips with her tongue, and his gaze snapped to them. It seemed like forever since he’d placed that last kiss on her arm. His head inched forward, his eyes roaming her face before meeting hers…

The carriage clattered to a stop and jolted her sideways. His strong hands grasped her waist, steadying her.

She couldn’t catch her breath, but he seemed calm enough, the bastard. She pushed back to her side of the seat and took deep breaths through her nose, trying hard to look as if she were doing nothing like that at all.

If you’d like to read more almost kisses, visit this page for links to the rest of the participants!

More about Must Love Breeches

She’s finally met the man of her dreams. There’s only one problem: he lives in a different century.

“a delicious twist on historical drama and romance” — USAToday

“Filled with historical tidbits and larger-than-life characters, the sweet story is a delight…” –Publisher’s Weekly

HOW FAR WOULD YOU TRAVEL FOR LOVE?

A mysterious artifact zaps Isabelle Rochon to pre-Victorian England, but before she understands the card case’s significance a thief steals it. Now she must find the artifact, navigate the pitfalls of a stiffly polite London, keep her time-traveling origins a secret, and resist her growing attraction to Lord Montagu, the Vicious Viscount so hot, he curls her toes.

To Lord Montagu nothing makes more sense than keeping his distance from the strange but lovely Colonial. However, when his scheme for revenge reaches a stalemate, he convinces Isabelle to masquerade as his fiancée. What he did not bargain on is being drawn to her intellectually as well as physically.

Lord Montagu’s now constant presence overthrows her equilibrium and her common sense. Isabelle thought all she wanted was to return home, but as passion flares between them, she must decide when her true home—as well as her heart—lies.