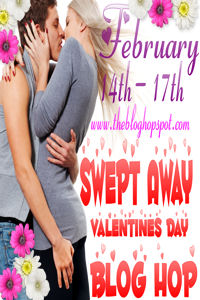 Welcome to the Swept Away Valentine’s Day Blog Hop! I’m geek girl romance author Angela Quarles. What makes my romances geeky? Oh, in a myriad of ways! Whether it’s fan girling over Ada Lovelace by having her as a secondary character in my time travel romance, Must Love Breeches, or outright geek references with geek types in my romantic comedy with paranormal elements, Beer and Groping in Las Vegas, or going all Southern steampunk in Steam Me Up, Rawley, I like to have fun with my romances and hope my readers do too.

And I have some fun for you–First, one lucky commenter will win a $5 Amazon gift Card!

Since Valentine’s Day is about romance, I thought I’d include a snippet from my current release BEER AND GROPING IN LAS VEGAS that has a romantic setting at a fictional Vegas hotel, plus he seems like he gets a bit swept away at the end, like the theme of our hop!

He glanced at his palm—”Mirjam” inked across in blue. The only information the follow-up note from the bellhop had told him after accepting the invitation, a first name and where and when to meet. Oh, and the cryptic last sentence: “Be in the moment and you will find the answer.” What answer? He didn’t feel like he knew the damn question, though he was questioning his own sanity for agreeing to this weird-ass date. Somehow, he’d felt certain, in his gut, he needed to answer ‘Yes’ to the crazy invitation he’d received from a guy named ‘Jim.’ A night with the ‘woman of his dreams.’ He rubbed the name away. No sense looking like a complete dufus.

“Here’s the gentleman requesting to meet you,” the concierge said, interrupting his thoughts.

Shit, no time to rethink this. Or take a breather. He took a calming breath. Keep your head in the game, Riley. A chance for a date with a decent girl, see what that is like. Nothing more.

“I’m Stefan,” said the man who approached him wearing a pink bow tie. “Your date is waiting for you by the pool. This way, sir.” Stefan escorted him through the lobby and out to a terrace. They wended their way around the glittering pool to a darker section. Torches lit the area every few feet, highlighting potted plants somehow kept alive in the desert heat. Gentle lapping from the pool blended with other guests’ murmurs. He followed Stefan up a short flight of stone steps set against a wall.

At the top, his guide swept back a leafy frond, revealing a granite table surrounded by lush foliage and a high stone wall. More torches blazed in each corner, casting enough light to see but adding a ton of atmosphere. A little hideaway for two, the elevation affording an extra layer of exclusivity.

His date faced the far wall, head tilted to the full moon looming above. Torchlight flickered across the ash-blonde hair tumbling down her back. He swallowed hard. Shit, if he were the romantic type, he’d be in hog heaven with this setting.

She slowly turned and faced him.

His breath caught. Dear God, he was in heaven.

Fore more information you can visit my book page, or view the trailer. It’s also available at these outlets:

Visit the other participants on the host website to learn about more books and chances to win more prizes !