Today I’m super excited to bring you Donna Cummings whom I’ve gotten to know via various online methods, and whose sense of humor and advice has helped me through several writerly journey bumps. She’s also a valued Beta reader. Writers talk about the need to have other writer friends to go to when they’re feeling out of sorts (or panicked) and Donna’s become one of those for me. Thank you, Donna!

Today, for Book Monday, not only is she going to give us an excerpt from her new release, but she’s also going to confess a habit she has regarding books. Take it away, Donna!

I’m always curious to see what people are reading. My neck can stretch giraffe-like just to get a peek at the title of a book they’re carrying. If someone is engrossed in a book while at Starbucks, all of a sudden I need to walk past them on my way to get a refill. Of napkins.

When I’m visiting someone’s home, the first thing I seek out is their bookshelves. I’ve learned to hide my glee when I see rows upon rows of books displayed for my viewing pleasure. And I never, ever say out loud (well, not anymore), “Oooh, wonder what they have that I need to take home with me!”

Seeing books lined up on shelves, or piled on tables, or teetering in a big stack on the floor, it’s easy to determine which ones have been read more than once, and which are just for show. This is trickier to accomplish when e-readers are involved, although if someone is on Goodreads, we can poke through their virtual shelves to see which books they’ve read, or want to read–and way too many of those end up in my own lists as a result of my rigorous “research”.

The heroine in my current release, I Do. . .or Die, tries to figure out the hero from viewing various items in his home, including the bookshelves. Shelby has been shot at, twice — the first time at her friend Alexa’s wedding. Shelby has to spend the night at Detective Ryan Nichols’ house for her protection, and this is her first time checking out the inside of Ryan’s home:

It was a place designed for a man’s comfort, not to impress female guests. A honey colored leather couch took up a large portion of the room, flanked by a couple of matching club chairs that were obviously well-used, probably whenever his policeman buddies dropped by. A large—no, make that a really large—flat-screen TV covered most of one wall.

Detective Nichols was a very tidy person, with not even a single random burst of clutter. That was distressing. People who had everything in its place kind of freaked me out. For one thing, how did they find time to keep everything in its place? And for another thing, why would they want to spend all their time doing that?

He leaned against the closed door, his arms folded across his chest, watching me stroll around his sparse living room.

I trailed a finger over the police league softball trophies covering the fireplace mantel. Another flaw. He probably liked to work out all the time, while I—well, I did try to lift my martini glass with alternating hands, so I could evenly develop my bicep muscles. But I couldn’t do that every day. My liver was too delicate for that kind of exercise regime.

Detective Nichols cleared his throat. “Think this will do for the night?”

I nodded, a little sad, yet relieved, that I’d uncovered these deal breakers. Not that it really mattered, since I’d only planned on getting in bed, not getting involved, with him. Still, a girl needs to have standards, even with flings.

“Are you letting me get accustomed to my surroundings?” I asked. “Like a new puppy or something?”

His lips turned up in that way I found too sexy, and my stomach did all kinds of silly flip-floppy things. “As long as I don’t have to swat you with a rolled-up newspaper, I think we’ll be fine.”

“Beats the hell out of bullets.”

I halted, peering at him as the words sank in. It always came back to that. No matter what else happened, I still had to deal with the shock of being shot at. Twice. In one day.

At a wedding. And then in a police car.

“You know, Shelby, you’ve got a pretty good sense of humor about all of this.”

“Oh, that’s only because I’m in that numb phase right now. Wait till I get a good night’s sleep and realize how incredibly insane all of this is.”

I wandered over to a bookcase, something he’d probably gotten from the Ikea catalog and put together himself. I loved to see which books people had, and which ones were never going to be read, based on my assessment of their personality.

This man loved mysteries. Thankfully for me, it looked like he’d actually read a lot of them, so he would know how to solve the one I was embroiled in. Or give advice to the detective he’d be handing me off to in the morning.

Do you like to investigate other people’s reading materials? Please tell me I’m not the only one!

“Always a bridesmaid, never a bride” is Shelby Atwood’s personal credo. She’s managed to avoid commitment all her life – no pets, no plants, not even a long-term lease. Heck, she’s had colds last longer than her romantic relationships. How could she be any other way when she has a gigolo for a father?

But then gunfire erupts at the latest wedding she’s agreed to be in, and it ends up being the best thing to happen to Shelby’s love life. Detective Ryan Nichols is assigned to the case, and when the shootings don’t stop, he becomes her 24-hour bodyguard. Shelby wouldn’t mind except Ryan is too appealing, too sexy, and too happy to remind her of the raucous bachelorette party when she mistook him for a stripper.

Shelby’s plan is simple: find the shooter, have a fling with Ryan, and return to her non-committal life. Unfortunately, the shooter is very elusive. Shelby’s feelings for Ryan are way more than adrenaline-fueled lust. And returning to her normal life is now impossible since, despite her lifelong resistance, she’s managed to put her heart smack dab in the line of fire. 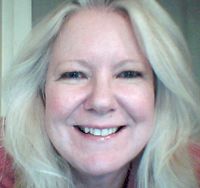 I have worked as an attorney, winery tasting room manager, and retail business owner, but nothing beats the thrill of writing humorously-ever-after romances.

I reside in New England, although I fantasize about spending the rest of my days in a tropical locale, wearing flip flops year-round, or in Regency London, scandalizing the ton.

In addition to I Do. . .or Die, my available books are Summer Lovin’, a free romantic comedy novella, and Lord Midnight, a Regency romance. My contemporary novella, Back on Track, part of the Strangers on a Train collection, will release from Samhain on April 2, 2013.

How to stalk her:

10 Replies to “Book Monday: Guest Author Donna Cummings and I Do… Or Die”