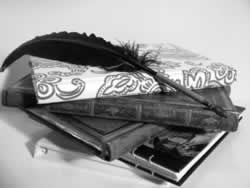 I don’t do these often, but I thought I’d post about what’s going on.

Oddly enough, Romance Writer’s of America (RWA) allows you to join their PRO ranks if you get a rejection! You have to prove that you are in the querying stage and also send them a copy of your complete manuscript. No extra charge, but now I have a groovy pin, am in a PRO listserv with others in the same stages, special tracks at the RWA conference this summer, and a shot at agent pitch timeslots before the general membership! So if you’re in RWA and qualify for PRO, take the small steps necessary and go pro!

AM NOW AN OFFICER IN OUR LOCAL WRITER’S GROUP

Last Thursday, I was honored to be elected the Vice President of the Mobile Writer’s Guild! I’m super excited to be a part of this dynamic and creative group and look forward to another year with everyone.

Still playing the waiting game here with agents. This is really teaching me patience, which is a good thing. I stopped querying agents when I reached 18, just so I could get the feedback from this round. Based on the number of positive responses to my query, I’m having a 33% success rate. If I hear back from the rest all in the negative, the worst my query will have will be a 17% success rate. I’m told this is really good, so I know my query is solid enough. Right now I have  two partials and two fulls out. Why aren’t I sending out to more agents if my query is solid? I don’t want to blow through them all if my submission isn’t the strongest it could be. So that I could dovetail agent responses with ammo for making it better, I put out a call for a new round of Beta readers, and I got so many awesome replies! Especially from the #sixsunday crowd. Thank you! Those are starting to trickle in and I think the space I’ve taken away from the manuscript, coupled with their feedback, and hopefully agent feedback, will help me make it better.

Since I can be obsessive about things, I needed to step away from sending more queries. So, I started brainstorming for a new novel, which led to…

STEAM ME UP, RAWLEY

This will be a steampunk set in 1890 Mobile, Alabama. I’ve tried to be a reformed pantser with this one and pulled out my storyboard and brainstormed sticky notes, etc. I even wrote a 14 page summary. But I think I’ve learned, especially for the romantic throughline, that I need to pants parts of it. I really liked coming up with my opening and closing images ahead of time, and my theme, which should help me write a tighter first draft, but there’s just some things that don’t happen for me until I’m in scene and writing. I just learned a new term from an online RWA class this week–plantzer–and maybe that’s what I’ll end up being! Here’s my mini character bios for this story:

A fledgling reporter in 1890 Mobile, Alabama, adrenaline junkie ADELE DE LA POINTE must get the new job at the paper or her father will force her to marry his new business partner. Determined to remain independent and free to enjoy all life has to offer, Adele pounces on the Jack the Ripper-style murders plaguing her city as just the story she needs to get the job.

Fresh from London, immigrating to America is about the most daring exploit DR. PHILLIP RAWLEY has ever done, thank you very much. He wishes to settle quietly in his adopted town and marry a sweet, supportive wife. His employer’s beautiful and impulsive daughter does not fit that image. She works. She’s wild. She has an armored pet monkey running errands for her.

BEER AND GROPING IN LAS VEGAS

While brainstorming STEAM ME UP, RAWLEY, I came up with a title for another story, BEER AND GROPING IN LAS VEGAS. This is the first time I’ve thought of a title before the story, and it was a fun way to start one. I’d been wanting to try my hand at writing short stories on spec for specific lines at epubs, and so a couple of days later my brain finally caught up and put that idea and the title idea together. The title provided some character and setting ideas, and I sat down Friday a week ago and started writing. Boy it felt so good to be writing something new! I started out with just an idea of the characters and their premise and by Sunday I’d written 7K words. I finished it by Tuesday and have been polishing it since. It’s now over 10K and I had a lot of fun with it. It’s about a guy who owns a microbrewery and is a bit of a geek trapped in a Good Ole Boy’s body. He longs to meet a smart chick, but in his line of work, and given his outward appearance, they don’t give him a second look. Will computer nerd Mirjam be the woman of his dreams?

Forgot to add this when I first hit publish. I’m still participating in the hard-core website www.authorsalon.com. The process is pretty rigorous, but I believe it’s worth it. Weekly I get emails announcing different agencies that want submissions from profiles that made it into their Showcase. I’ve received feedback from all my peers and just need to finish one more peer review, and then I’m going to make tweaks to my profile and call for a vote for advancement.

I highly encourage all authors serious about their writing to join this site!

How about you? What are you up to? Consider this an open thread to share the latest in your writing world. If you’re interested in Beta reading either of my new WIPs, just let me know. I will return the favor!

20 Replies to “What’s Been Up Lately With Me”