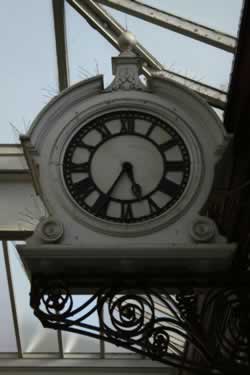 Okay, so about the novel I’m working on. I’m really excited about it as I’ve always been a sucker for the time travel story. It’s such a fun way to see history and I love the juxtapositions of modern sensibilities with whatever past the protagonist is in.
So, when it came time to come up with my NaNoWriMo 2010 project, I thought, why not? I knew I wanted to go back to the 1800s, but I wasn’t quite sure when. After doing some preliminary research, I ran across a Wikipedia article on Ada Byron Lovelace and I knew I had to have her be a supporting character. I initially conceived that Charles Babbage would play a larger role (even toyed with him being the romantic lead!) but decided to let Ada’s light shine on her own — it seems she’s always coupled with Babbage. So the one year where she was “out” (having her London debut as a marriageable young lady) was 1834, so that’s when my story takes place.
Here’s the back cover blurb for it so far (any advice on improving it would be totally welcomed!)

Isabelle Rochon is an American museum curator working for the British Museum. When she finds a mysterious silver card-case, she thinks it a perfect accessory for a reenactment ball. But what she thought would be an exciting lark, fulfilling her desire to “live a little history”, becomes more than she bargained for when she realizes that the attendees are a little too realistic: she is truly in 1834 London, England. There she meets Lord Montagu, who’s so hot he curls her toes. A thief steals her silver case, stranding a feisty, modern American in a stiffly polite London on the verge of the Victorian age. She finds it hard to resist her growing attraction for Lord Montagu, known even to his relatives as the Vicious Viscount.

Can their love overcome the biggest barrier of all – time? And what difference will a working model of the Difference Engine make to the next two centuries?

I’m currently on the third draft and hoping to have that wrapped up soon so I can have some folks I trust read it through and help find all the slips in logic, continuity errors, bad grammar, uneven pacing, bad plot decisions, the usual stuff. Meanwhile, I will post soon some lessons I’ve learned this summer while revising this, plus excerpts from this working draft.

What are some of your favorite time travel books?