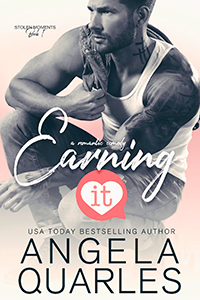 EARNING IT is available for pre-order! It’s been over a year since I first wrote Luke and Pepper’s story, and it first appeared for 90 days in the SOME LIKE IT GEEK box set this past Spring (as To Score or Not to Score)

This story is close to my heart for several reasons!

One — it takes place in my hometown, Sarasota, Florida!

Two — it’s the first story I wrote in 1st person present tense, and I felt such joy while writing it.

Three — the men in this series play a little known Irish sport called hurling. Back in my younger, fitter days, I used to play Gaelic football in Atlanta, GA and had such a wonderful time not only learning the sport, but also learning more from all the ex-pat Irish players about their culture. Some of them also played hurling, and when I traveled to many a game to play Gaelic football I was able to watch this awesome sport.

Four — I’m also a sucker for second-chance love and the beanpole kid growing up into a hunk. This was inspired by a high school reunion where a classmate grew into a handsome man and all the popular girls who didn’t give him the time of day back then were all over him.

One blind date. One case of mistaken identity. One Navy SEAL faced with his high school crush. What could go wrong?

To Score…
Holy cow, my blind date is rawr-hot. Everything in me aches to explore more with this man, but I can’t. I’ve got too much on the line professionally, with me starting at my new medical practice on shaky ground. But I can’t deny that I want the sex. A fling is perfect. Bonus—I will prove my idiot ex-boyfriend wrong. I’m not cold.

Or Not to Score…
Once she mistakes me for her blind date, my plan is clear. Be this Rick the Lawyer she thinks I am. And for the space of this coffee date, talk to the only woman who’s ever made me feel any spark outside of combat. Best case scenario, I get to be outside my skin—free to be whatever the hell I want. Worst case—she recognizes me as we chat. She’ll be pissed, call me an asshole, but it won’t be anything she hasn’t called me in the past, so… Win/Win?

Pre-Order at the following vendors

Amazon: preorder will be available a few days before release, which is October 4th. If you’d like to be notified of when it goes live, you can sign-up for my one-time notification list