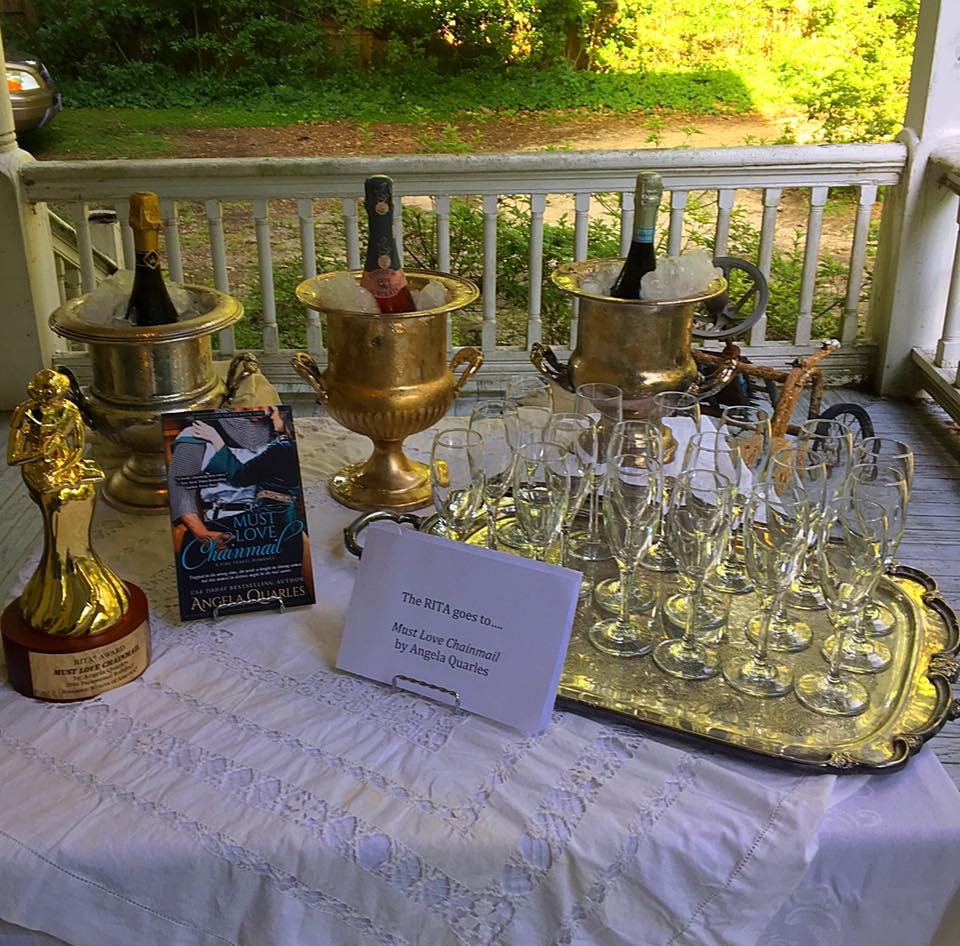 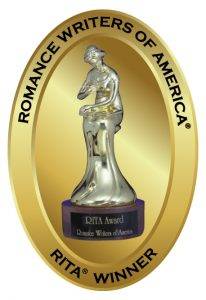 To say I’m shocked is an understatement. As I told some people beforehand who were wishing me luck, I figured I’d used my snowball’s chance in ___ just to final O_o

The Romance Writer’s of America conference was held in beautiful San Diego, right on the water. The sessions were invigorating, and I had my first signings at RWA–first at the Literacy signing Wednesday night, and then at the Indie signing on Thursday. I got a nice RITA Finalist blue flag at the Literacy signing, which I snagged 🙂

But when folks asked if I was nervous about Saturday, I found that I wasn’t. I assumed it was because I was successfully blocking it. It didn’t really hit me emotionally until we were at the RITA/Golden Heart champagne reception on Friday, when they named each finalist to come up and get a certificate and I was hearing all the big names in romance being called. I looked to Jules Barnard, another first-time finalist, and I think we both just mouthed OMG together. We did a group hug with another first-timer, and we got a bit choked up as it finally hit us.

Jules made a hair appointment for us on Saturday, and we went and got updos–

I was running short of time, so I couldn’t have a celebratory sit-down dinner with my roomies Jami Gold and Marlene Relja, so they went and picked up food to bring back to the room before I had to get dressed. While they were gone, I bought a copy of Chainmail so I could look in the Acknowledgments and make a quick bullet point list of thank-yous just in case.

We had a bit of an issue cramming me into my dress, but off we went!

Jami kept me distracted as we sat at the VIP table, and I still wasn’t nervous, but I figured the anticipation would maybe hit once the program started. But it didn’t. I think it was because I really didn’t expect to win–I was just happy to be there and have my name as a finalist along with Nora Roberts, Kristen Callihan (an auto-buy author for me!), Thea Harrison, Sharon Ashwood, and Asa Maria Bradley.

So when they got to the envelope opening for Paranormal, Jami reached over to grab my hand, thinking I needed the moral support, but I waved her away, because I was honestly fine–I knew I wasn’t going to win and I wasn’t going to be disappointed about it. Then as I was waving her away during the “and the winner is” part and heard the words “Must Love” Jami said my jaw dropped open and that I put my head on the table for a minute (I don’t remember that!). I then had to fish that bullet point list out of my clutch (cuz I didn’t have it handy, waiting) and when I stood, Jami tackled me in a huge hug. Her makeup smeared my left lens, so I couldn’t see, so I had to stop and wipe my glasses on Jessa’s dress on the way to the stage.

The whole time I was up there, it was like an out-of-body experience. I was so stunned, I was incapable of any other emotion, which was a good thing or I might have gotten all blubbery and not been able to get through my bullet points 😀

Of course I hoped, but I didn’t think it would actually happen. Some told me later that they viewed it as the big underdog win, since I’m a relatively unknown author, and I beat the Queen of Romance, known in our circles as La Nora. This makes my book the first self-published title to win in the paranormal category, and the first self-published title to beat Nora Roberts.

It all happened so fast, it had a hard time sinking in. They ushered Jessa and I backstage for photos with Nalini Singh (the presenter for my category) and I think the whole time we were both pretty much going OMG that I didn’t even realize Ms. Singh was standing there with us having our pictures taken until the photographer said, “okay how about some with just the two of you…”

When I got back to the table, I just looked at Jami and said, “Did that just happen?” And she said, “Yes, it did.” I think this pretty much sums it up:

And as one of my bullet points stated, I want to thank all of my readers for taking a chance on an unknown author!

I had a sale planned this week anyway for this book, so if you haven’t picked it up yet, it’ll be on sale for 99 cents through Sunday!