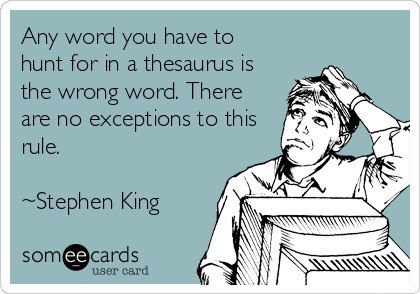 Sometimes I wonder about the universe and how it will sync random events to make a point, teach us something, or just plain laugh at us.

Yesterday, a fellow writer posted this some-ecard with the quote from Stephen King on Facebook and I wrote the following comment:

I don’t know– I think there’s an exception–if you’re only using words you find in there that you already know well and have just forgotten it, and so you’re like “oh, yes, that’s a good one.” Problem is when people use it to use words they don’t know and so potentially use it in the wrong context or it has a shade of meaning they are unfamiliar with. Or are just trying to use ‘impressive’ words. I sometimes (I’m of a certain age) find that I also forget nice simple words too.

And then I proceed to fire up the old Kindle to read a new book that should be right up my alley–a quirky, nerdy heroine stumbling toward love. It was recommended by another writer in a blog post as a refreshing, new voice and I just had to check it out. It started out great (voice, check), and I do really like the quirky, nerdy heroine (check), but soon I started cringing.

The writer is using a vocabulary wider than her own. It clearly suffers from thesaurusitis and while the heroine is supposed to be über smart and nerdy, and so it would seem to be appropriate for the heroine to have a great vocabulary and use big words, the problem is, the writer doesn’t have the same vocabulary as the heroine she’s trying to write and so is using words that she thinks portrays the synonym for the word she looked up, but the shade of meaning or context is completely wrong. Making for some unintentional funny moments. Frankly, it’s spoiled the book for me, though I’m still going to continue reading it today just because I do like the heroine and her situation. But I won’t be recommending it to anyone. My co-worker asked if it was supposed to be intentional, but I don’t think so–this character isn’t being portrayed as someone who thinks she’s smart and using words in the wrong context to provide hilarity, she’s actually supposed to be smart.

And is this irony or just Alanis Morissette irony?

I hate to admit this, but I struggle with whether something is true irony, so help a girl out. Is the fact that I wrote that comment on Facebook saying there is an exception and then on the same day I start a book that illustrates the other half of my comment:

Problem is when people use it to use words they don’t know and so potentially use it in the wrong context or it has a shade of meaning they are unfamiliar with.

Is that true irony? Because I rarely read a book that suffers from thesaurusitis and it was kinda freaky for me to start one on the same day that did.

Do you agree with Stephen King re: thesaurus usage? Or, do you use one? And if so, how?

25 Replies to “Are you using a thesaurus correctly? And is this irony?”