I’m so excited to have one of my Beta partners on my blog today, Kate Meader! Her debut novel released just last week from Grand Central’s Forever imprint, and boy-howdy is it awesome! I first came across her in the blog hop Six Sentence Sunday, and as soon as I started reading her snippets, I was hooked on this story! Not only did it have a scrumptious hero, but it had fantastic humor; my kind of read! So we struck up an online friendship, and I Beta read Feel the Heat, and she Beta read Must Love Breeches and have been Beta partners since. Given that her brand of humor is what attracted me to her writing, I asked if she could touch on humor in her writing. So take it away, Kate!

Thanks to Angela for hosting and letting me talk about Feel the Heat, the first book in my Chicago-set Hot in the Kitchen series about an Italian restaurant owning family and the sizzling, sexy chefs who love them.

Have you ever read those “survey” results in Cosmo or the like where a woman will rate what she thinks is most important or sexiest to her in a man? They never say that he has to be built like Dwayne “the Rock” Johnson or that he has to have more jaw than necessary. Sure we won’t throw that guy out of bed for eating chips but invariably, it’s intelligence, compassion and—ding ding ding!—a sense of humor that rises to the top of the list. Every woman (and plenty of guys) want a man who can make them laugh. The fantasy guy of romance novels might be the brooding alpha who’s so tortured and possessive that he makes his lady’s life miserable, only compensating for his assholic behavior by burning up the heroine between the sheets. But for women IRL, a guy who brings the funny gets us every time.

Well, lucky for you, dear reader, the hero of my debut foodie romance, Feel the Heat, brings the best of both worlds—I had to make him a little arrogant after all. And British. (Same difference, I hear some of you say.) Jack Kilroy is an amazing chef, a born leader, a man who has women eating out of his hand. Often literally. So he also has a few insecurities, mostly about whether people want to use him for his fame and his wealth, but he’s what I call “happy alpha”. He doesn’t dwell on his problems too much and he certainly doesn’t hesitate when it comes to Lili DeLuca. Jack is sure he wants to date this smart mouth woman—and viral videos of steamy kisses, butts with their own Twitter accounts, and his bitch fork-wielding fans are not going to stand in his way.

What makes these two so perfect for each other is that Lili is rather unimpressed by Jack’s fame and is unafraid to take him down a peg or three. Oh, his assets are undeniable but if he thinks he can sway her with those gorgeous green eyes and his disruptively handsome cheekbones, he can think again. When they first meet, Jack has made a shambles of Lili’s restaurant kitchen, so she jumps into clean-up mode—and takes a jab at Le Kilroy while she’s at it.

She glanced down at his hand resting on her golden skin. By the time her eyes had made the return trip, she was shooting sparks. Back off. Hooking a stray lock behind her ear, she returned to her task—cleaning up his mess and making him look like an arse. A cloud of unruly, cocoa brown hair pitched forward, obscuring her heart-shaped face and giving her a distinct lunatic vibe.

It would take more than a death stare and a shock of crazy curls to put him off. Teasing her was too much fun.

“I’m pretty fast, love, and if you can move with superhero speed, we’d get it done in a jiffy.”

Another push back of her hair revealed a pitying smile. “Don’t ever claim to be fast, Kilroy. No woman wants to hear that.”

Best of all, he’s not afraid to look silly to get her attention. Here, Jack shows up at Lili’s apartment after screwing up royally (as only a guy can do):

The sound of a scuffle bounced through the intercom followed by more foreign babbling. A full minute passed.

“All right, you’re going to be sorry,” he said, inducing a flap of panic in her chest. Would he try to break in? Bang on her door until one of the neighbors called the cops?

If only. It was worse. Much worse.

The caterwauling made by the most deluded of wannabe contestants on American Idol had nothing on this. Hearing such a sound blasting from her TV was one thing; listening to it through her intercom was quite another. His voice had not improved any since the last time she’d heard him mangling a tune, right before she clocked him with a frying pan.

“Lili, I just met a girl, she’s called Lili…” This, to the tune of “Maria” from West Side Story.

Someone on the street cheered. Encouraged, Jack raised his voice a couple of inadvisable octaves. Another voice punctuated the lyrics with shouts of “Lili” a half-beat late. There was a pause as Jack told his accompanist in no uncertain terms to shut the fuck  up.

Who doesn’t love a guy who will sing for his woman on a busy Chicago street? Jack is a balls-out passionate guy and his single-minded focus combined with his great sense of humor slowly breaks down Lili’s defenses. So we won’t say no to the handsome lug but if he isn’t making us smile, then forget about it!

Tell me about the funniest guy you ever dated. Did you keep him or did you let him get away?

During the Feel the Heat release tour, I am giving away foodie-related swag: one Grand Prize and five smaller prize packs! Details and pics on my website. Enter using Rafflecopter! 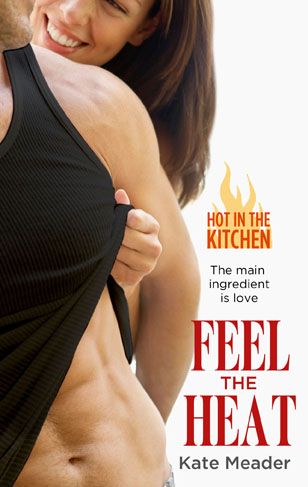 FEEL THE HEAT by Kate Meader

Hot in the Kitchen, Book 1

Photographer Lili DeLuca spends all her time managing her family’s Italian restaurant, instead of following her dream of getting an MFA. When famous British chef Jack Kilroy unexpectedly challenges her father to a cook-off, Lili decides she’s tired of playing it safe and vows to seduce the tempting Brit. But once a video of her and Jack kissing goes viral and her luscious butt starts trending on Twitter, Lili fears she’s cooked up a recipe for disaster.

GET INTO THE BEDROOM

Jack Kilroy’s celebrity has left him feeling used and used up. While Lili’s oh-so-sexy moans when she tastes his delicious creations turn him on, he’s even more aroused by how unimpressed this beautiful, funny woman is with his fame. He knows they could be amazing together, if she could only see past his bitch fork-wielding fan base. Now, as he’s about to start a new prime time TV cooking show, can Jack convince Lili to realize her own ambitions – and turn up the heat in his kitchen? 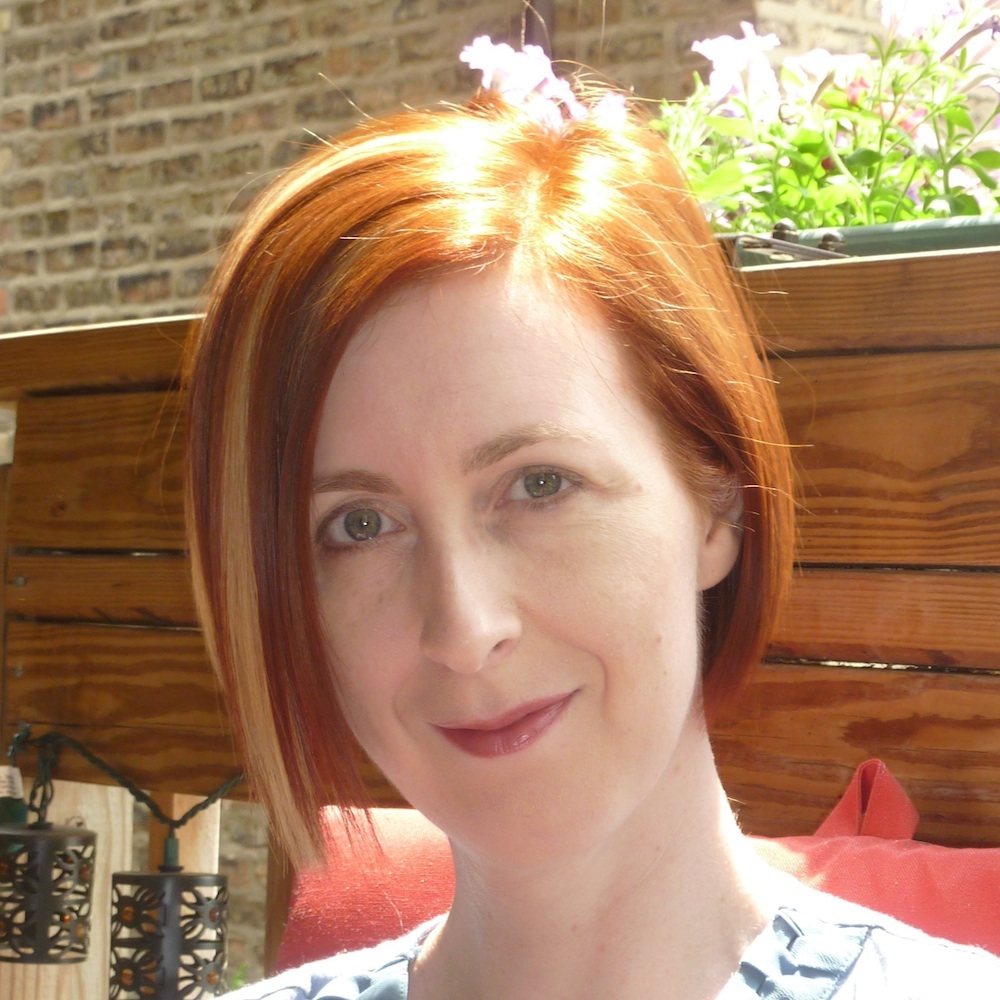 Kate Meader writes contemporary romance that serves up delicious food, to-die-for heroes, and heroines with a dash of sass. Originally from Ireland, she cut her romance reader teeth on Catherine Cookson and Jilly Cooper novels, with some Mills & Boons thrown in for variety. Give her tales about brooding mill owners, oversexed equestrians, and men who can rock an apron, and she’s there. She has a bachelor’s in law (useless), a master’s in history (not as useless), and another master’s in library and information science (yay, using). When not writing about men who cook and the women who drool over them, she works in an academic library. Her stories are set in her adopted home town of Chicago, a city made for food, romance, and laughter – and where she met her own sexy hero. For news, excerpts, and recipes, check out her website at www.katemeader.com.

Ways to stalk her:

8 Replies to “Guest post: Kate Meader’s recipe for the sexy in FEEL THE HEAT? Humor!”