Two Wednesdays ago, I wrote a blog post where I shared my limited experience with running ads on Facebook and Goodreads, Writer Wednesday:  Goodreads vs Facebook Ads – an Experiment, and got a lot of great comments!

My ad has now been running for over three weeks on Facebook and two and a half on Goodreads, and still, hands-down, Goodreads has been the better option. I still haven’t garnered a single click on my Facebook ads. And only 1231 views since Jan 3! I’ve now spent $4.10 on Goodreads and my ad has had over 63,000 views, and 41 clicks!

I also wanted to share some of the helpful tips left in the comments, including a clarification from a Goodreads representative.

He said that when he got a great succinct quote from a reputable reviewer, he changed his ad and the clicks and adds skyrocketed. I went ahead and changed mine, and yep, it out performs my book blurb ad by more than half, in both clicks and adds. 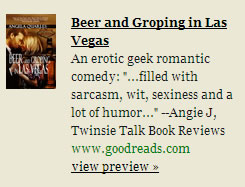 To be fair, I changed my Facebook campaign to have this quote too, and still zip… The consensus from the comments in my first post seemed to be that we’ve now been trained over the last several years to ignore those ads because they’re now non-relevant to our daily lives. This is a shame, because I remember in the early days that this wasn’t the case. Oh, well.

This is interesting. My views are abysmal for author targeted (probably because I’m only paying .10/click) BUT when it does get seen, it outperforms the new ad with the quote by almost double! I need to add an author-targeted one with a quote and see what that double whammy produces! And maybe bump up my cost per click a tad for just that ad.

So, Goodreads is the place to advertise

Based on my limited experience, and from the comments the post garnered. Makes sense, given that it’s a place for readers to congregate and learn about books, so they do NOT mind seeing relevant book ads. One commenter pointed out that this could all change if Goodreads begins showing non-book ads and we again, like on Facebook, become trained to ignore that side of the page.

Clarification on who sees the GR ad

Margo from Goodreads stopped by several days later and left a very helpful comment clarifying who sees the ad. She says:

She also left this link to a Best Practices document! Thanks Margo!

Thanks for everyone who commented. Did I leave out anything? Have you started your ad on GR because of my earlier post, and has it done anything for you?