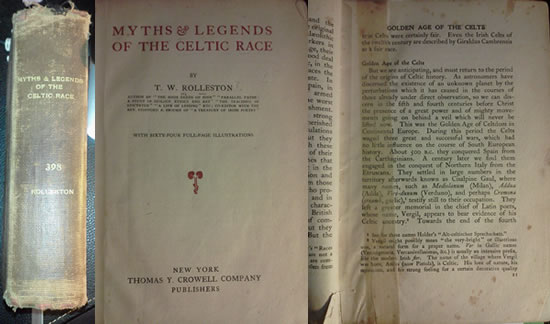 What I’m reading right now, in between fiction books, is Myths and Legends of the Celtic Race

by T.W. Rolleston and it’s reaffirming my love for several things: the really old books, and history books.

As some of these old history books can be, I expected it to be pretty dry, but have found myself pleasantly surprised! He keeps it entertaining while also informing.

This is one of the early editions and so it’s delightfully dog-eared, splattered with foxing, softened pages from usage, and that nice old-book smell.

He dives into historical origins in the beginning before he gets to the myths and legends, and it was fun to go into his little sidenotes he explored via footnotes–little diversions that a modern historian would never dare indulge in. Like the footnote that talked about how the early Celts had dolichocephalic-shaped heads.

Some things I’ve learned so far about the Celts (according to Rolleston) that I didn’t know (and fully acknowledging later scholarship could have disproved some of this. It’s still fun):

And I just came across this wonderful sentence and duly noted its usage of “dilates” in my writer’s journal. For context, he’s talking about another historian’s book, O’Grady’s “Critical History of Ireland”:

This work is no less remarkable for its critical insight…than for the true bardic imagination, kindred to that of the ancient myth-makers themselves, which recreates the dead forms of the past and dilates them with the breath of life.

Wow. I just loved that! My brain immediately got what he was trying to say with that usage of the word ‘dilates’ — I pictured it immediately blooming large.

Not surprisingly, I came across references to myths referenced in other author’s works of fiction, but it was still fun to come across. Like when the origin of the sword Fragarach was mentioned, and I was like “Hey! That’s Atticus’ sword!” I’m a huge fan of Kevin Hearne’s Iron Druid Chronicles

and so tweeted him yesterday when I came to that part in the book:

@angelaquarles Fragarach is definitely worth a mention or three. 🙂

Anyway, I’m totally enjoying this book, and I’m only a quarter of the way through it. And I’m not sure I’d enjoy it quite so much if I was reading a modern reprint. Part of the charm is the package 🙂

What are you reading right now that’s surprised you?

13 Replies to “The joys of reading OLD history books: Myths & Legends of the Celtic Race”