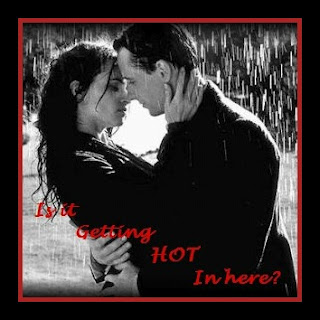 I’m participating in the Is It Getting HOT In Here? Blog Hop in honor of Valentine’s Day. The object is to share a kiss from either a favorite story, from our own experience, or from our own work. I decided to share a scene from my current time travel romance MUST LOVE BREECHES. It’s the first time things get a little heated between them.

In this scene, the heroine, Isabelle (from modern day), is in a carriage with the hero, Lord Montagu (19th century man). She’s just rigged a hasty bandage on his arm from an injury he sustained. She wants to know what happened:

“What I don’t understand,” she said, pausing as his eyes snapped back open, “is how you met with the business end of an iron rose trellis.” She grabbed the last remaining bit of linen and used it to clean the blood off her hands and the seat. She took the lamp and replaced it on its hook by her head. Not knowing what to do with the bloodied linen, she dropped it onto the floor. She pulled her gloves back on, afraid she’d forget them.

“As you are determined to know, the offending object was directly beneath the window and appeared to be an ideal perch for me to make my descent. Unfortunately, I lost my footing and slid down the side of it. My fall was marginally slowed when I went over the edge and one of its points ripped through my coat sleeve to produce this scratch.”

“Scratch? You call that a scratch?”

“Gah. Men!” She thwacked him in the chest with her small purse.

The hand of his uninjured arm shot out, captured her wrist in his strong fingers and pulled her slightly forward. “Miss Rochon, why do you suddenly have the compulsion to strike me repeatedly?”

Isabelle’s trapped hand absorbed her whole attention, the small purse dangling in a small arc, the meager light from the lamp setting the sewn-in jewels sparkling. Her wrist moved upward, pulled by Lord Montagu, and she followed its ascent transfixed. Lord Montagu slowly turned her wrist and brushed the underside, right at the pulse point, with his lips. Isabelle shivered despite the barrier of her glove. His well shaped lips, moving just oh so slightly to her wrist; the scar below his lip stretching.

Without thinking, she snatched her wrist out of his grasp.

Her mind caught up to her action. Why, oh why did she always do stupid stuff like that with guys she found attractive? They caused a strange flight response—her curse. What scared her? Someone give me a Rewind button.

“Why’d you do that?” Oh my God, had she just asked him that? Could a black hole open below her and suck her in? Please?

“Why do you surmise, Miss Rochon?” His eyes stared straight into hers, awaiting an answer, searching.

“My apologies, I have caused you discomfort. That was not my intention.” His eyes shuttered and his shoulders stiffened.

You idiot Isabelle, what does it matter? Here was a chance to let go, without any consequences. Strange that she’d pulled away, though. Usually she was more at ease, more flirtatious, around men when she traveled—they posed no real threat to her, to her life. So, why not in this situation? Also, strange that she recognized what she was doing in time to change it.

She could push past her fear, against her instincts, use this as a ‘teaching moment,’ as her mother used to say. As long as she could keep her own feelings in check and not hurt him.

And besides this wasn’t her real life. Maybe this was a good time to get in some practice. He still looked at her, but he did not appear angry or hurt. Maybe a little confused.

“You took me by surprise is all.” She let her gaze linger over his strong cheekbones and then down to his lips and the scar. Okay, just do it. Her hand reached up to touch his scar. Man, they shook a little bit, but too late to turn back now.

His eyes darkened, his gaze became more intent. The space between them seemed so large, the time it took for her hand to reach him embarrassingly slow. Oh, lord, and she was leaning at an awkward angle toward him. To remain steady, she put her left hand down to support herself.

Finally, the gloved finger of her right hand reached his chin and traced a path over to the cleft in his chin, a feature on any man that made her want to go ‘Rowr!’

He was not doing a thing. He only stared at her. God, where was that black hole? So much for trying to take control, pushing past her fear.

She closed her eyes and let her hand drop. Her breath hitched—his hand had grazed her upper arm. His fingers paused for only a moment as they delicately passed by the inner part of her elbow.

Shivers flitted through her body, erupting as goose bumps on her skin. When had that part of her body become so sensitive?

The light touch of his fingers brushed down her gloved arm and slowly enfolded her hand in his. He turned it slightly, so that her palm faced up, exposing the soft part of her arm. When the warmth of his lips met the tips of her fingers, her eyes snapped open.

Somehow she’d moved closer to him on the seat and as she gazed at his lips, transfixed, he moved his head lower and kissed her palm. His head moved a fraction and he placed another soft, tender kiss on her wrist.

Oh God, she was having trouble finding her breath.

No one had ever done this to her in her life.

She couldn’t tear her gaze away as his delectable mouth moved up her arm with soft kisses until it reached the end of the glove, right below her elbow. He paused, his breath caressing her skin. What would he do next? Then his lips touched her bare flesh for the first time, just on the inside of her arm.

Heat seared around her chest and speared downward. Where had all the air in the carriage gone? Her head felt fizzy. The sound of their breathing filled the coach, heightened, joining, wondering. She had the overwhelming urge to push him back against the seat and jump his bones.

Slowly he raised his head. What would those painstakingly tender lips feel like against her own? She moistened her lips with her tongue. It seemed like forever since he’d placed that last kiss on her arm.

The carriage clattered to a stop, jolting her forward slightly. His strong hands grasped her waist, steadying her.

She still couldn’t catch her breath, but he seemed calm enough, the bastard. She pushed back to her side of the seat and took deep breaths though her nose, trying hard to look like she was doing nothing like that at all.

As always, I welcome helpful feedback! What did you think? Be sure to visit the other participants.

15 Replies to “Is It Getting HOT in Here? A Steamy Kiss Blog Hop”