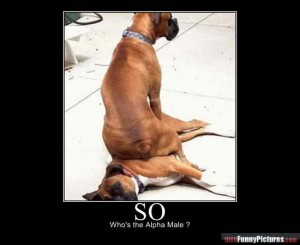 Recently I received an email from a writer friend who’s agented, but has not had any luck selling her first novel. She told me that her agent says that the problem is that her hero and heroine are too much like real life and that she needs to make them into the romance cliché, and for the male, that means he needs to be Alpha, baby.

I’ve read this friend’s novel and I loved the hero, he had a quiet strength, he was intelligent and he respected the heroine. Her agent loves the characters too, but apparently the editors she’s pitched it to don’t. The agent said she needed to revise the hero so that he is more arrogant, more aggressive, and more domineering.

As new writers, in order to get published with traditional publishers, are we doomed to stick to this stereotype? Is this why many have chosen to go with smaller, independent presses? Apparently the Big 6 demand this type of hero and so if you’re tired of it, you know whom to blame. It’s this all-pervasive monolithic stereotype that allows us to chuckle at this 2-minute regency romance because it’s so dang true.

I know there are many readers and reviewers who lament the pervasiveness of this type of male in Romancelandia. In a Google search on the subject, I’ve come across these various opinions:

In the old school romances of the 70s and 80s, Alphas were assholes who practiced forced seductions if not rape. Sarah Wendell and Candy Tan of Smart Bitches Trashy Books (SBTB) gave this hero the term alphole in her book Beyond Heaving Bosoms: The Smart Bitches’ Guide to Romance Novels

and that today this type has thankfully become the minority. But Jane at Dear Author discusses how even the stereotyped Alpha male has morphed of late from strong and confident to monstrous and overbearing. She goes on to lament:

We have this warped view of alpha men.   They are caricatures relying primarily on physical prowess to serve a romance shorthand for all those things that we view a hero should be.   But the unfortunate thing is that it straightjackets the heroes’ character such that they aren’t allowed to drink mixed drinks or sleep in pajamas without being viewed with immediate suspicion that perhaps they are, in fact, from the other end the Greek alphabet.

She ends her post with this valid question, which elicited some great comments about what readers want and their definition of an Alpha male:

Now, you readers might tell me that your books don’t have these uber alpha characters and if that is so, tell me the titles of those books. Or perhaps the alpha male means something else to  you or you really must have an alpha male for the book to interest you.   I want to know why because ultimately the question I have is whether the alpha male that we read about today is reflecting what readers want or whether its a literary exaggeration done unconsciously to evoke a certain reader response [emphasis mine].

The blog Heroes and Heartbreakers has an excellent post on when an Alpha becomes too Alpha, and uses the excellent Loretta Chase novel Lord of Scoundrels

as a perfect illustration of the need to match that Alpha with a strong heroine:

Since most Alpha Male heroes tend to be physically more powerful, the best romance authors compensate by matching them up with heroines who are stronger intellectually, who use words and wit and cunning. Either way, when paired with a strong-willed heroine who is capable of defending and maintaining herself, the hero’s forceful personality and aggression come across as challenges rather than threats

What about the poor Beta male?

Heroines With Hearts blog wants to know what’s wrong with the Beta male:

I blame the romance industry (publishing) for their unbidden constancy of inflicting Alpha males upon readers of romance. What’s wrong with a Beta male?  To be honest, I always fancied Dandini rather than Prince Charming. The latter too vain in every way: Dandini the charmer of the two. Hee hee, and a man on his knees placing glass slipper on feet far more to my liking!

Sarah over at SBTB kicked off a great discussion a while back on what makes a real-life hero and asks if there are such in Romance novels. In the comments one reader referred to these as the Omega hero, and another referred to them as The Sandwich. I just HAD to know what the latter meant and it brought me to this great post by Sarah Rees Brennan where she breaks down Romance heroes into 3 types: The Angst Muffin (which would be most Alpha males), The Sandwich (reliable and dependable) and The Pastry (wide-ranging varieties that can initially be off-putting but are sweet inside). It’s a great read and she gives examples from books for each type.

My writer friend said that she couldn’t think of examples of romances featuring non-Alphas, but Sarah Rees Brennan’s post mentions a few for each. In my recent reading experience I can name an example for the other two, and oddly (or not so oddly, as I’m really coming to believe she’s one of the best in the genre) they are both Loretta Chase novels. In Lord Perfect

, we get The Sandwich delightfully thrown into a situation that ruffles his world. And in Mr. Impossible

we get a wonderfully strong and sweet Pastry who surprised me time and again with his non-Alpha responses to the heroine.  It’s been awhile since I’ve read some Julia Quinn, but I’m thinking some of the Bridgerton brothers weren’t Angst Muffins, or am I misremembering?

And there are those that are tired of the Alpha male

A writer on the absolutewrite.com forum posed this question:

The Hero’s are always tough guys that get what they want because they are either rich and sexy, a dangerous Vampire and sexy, or a medieval lord and sexy. I’m not talking about having a weak willed guy keeping his head down with a female dom, but when I wrote my next book I did it with the idea that this guy wouldn’t walk around with his chest puffed out all the time, though he could still handle himself when needed. But that seems to be the problem in my story. My critique partners are saying that any medieval lord had to be a dominant alpha in order to protect his lands, and I can understand this and have made a few changes to hopefully buff him up enough so that they’re satisfied, but does an alpha hero who knows how to handle himself have to be an arrogant jerk?

And it generated a lot of comments.

And Wendy Palmer doesn’t like them either. She likes:

Calm, competent men who actually get things done while Mr Arsehole Alpha is off ranting or brooding or obsessing about status or measuring the size of his mobile phone or whatever it is these Heathcliff types do. They also have the decency to converse politely with women they don’t find attractive and don’t intend to sleep with, which some real-life wannabe alphas don’t (it’s always fun trying to make small talk withthem in a social situation, I can tell you).

But she also says what she’d like to see are male characters that are well-rounded, instead of being pigeon-holed:

Of course, the most important thing … is that they are decent characters first, and fall into those categories [Alpha, Beta] second — and even then, generally only loosely — just like real people, none of whom are 100% alpha or beta or omega or whatever animal classification you want to try to force on them. One of my favourite characters ever is Lord Peter Wimsey; he’s nothing like the modern alpha male but nor could he really be called a beta with its unfair undertone of submission.

Which brings us to…

Give us real males

Erotica author Freya Duquesne had a great post on this subject in which she sums up with:

What I’d love to see in more nov­els is not Alpha Male or Beta Male, but real males. Real guys that stand out­side and beyond the Alpha Male/Beta Male cliches. Flawed, yes, but maybe not in the stereo­typ­i­cal ways. It would be nice to read about heroes that know how to com­mu­ni­cate, who do value women for more than just sex, who are socially con­scious and…humble. Who are will­ing to lis­ten and con­sider the ideas of other people, instead of act­ing brashly on their own.

In defense of the Alpha

Suzanne Brockmann was asked why she loved Alpha males, and I thought her response very enlightening. She says:

When I create my characters, I don’t think in terms of labels. I don’t say, okay, I’m going to sit down now and create an alpha male or a beta male. Instead of male or female, alpha or beta, I create a human being.

So what does all this mean?

There are examples of non Alpha males in Romance and there’s definitely an audience for them, but can you only push those boundaries once you become a well-respected author like Loretta Chase? As a new writer do we need to conform first and then break out? This is worrisome as my hero is not an Alpha male. I posted this question in a private forum with some of my critique partners, and they were worried too since their heroes weren’t Alphas either. One commenter said:

I like the romances that Mira books print. Those books (by authors like Debbie Macomber and Susan Wiggs) have strong, interesting characters without all the stereotypes. I really hate the arrogant male. He annoys me. I am not attracted to that type in RL, why would I spend 300 pages reading about a guy like that. I understand the frustration. It’s so two-faced.

Another said, “…they want stereotypes…they just want nice little bows on them so they don’t look like stereotypes, but still are.” She’s worried too because her hero isn’t an Alpha, but yet her crit partners loved her hero and told her not to change him.

What do you think? Can a new writer get published with a non-Alpha male? If we write about a non-Alpha male, are there other elements that need to be present in order to compensate? Do you like Alpha males? Do you have romances you can recommend that feature Made of Awesome heroes that aren’t Alphas?

29 Replies to “Non-Alphas Need Not Apply: Can only Alpha males get published in Romancelandia?”