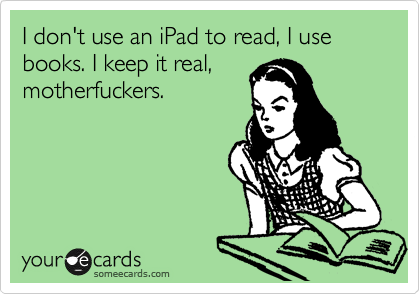 At the end of last month a blogger I follow posted 8 Reasons Regular Books Will Become an Endangered Species which touched on what many people feel is the way of the future: the many conveniences of having an e-Reader. This caused another reader to post Why eBooks Won’t Replace Real Books.

I think I tend toward the latter poster, though I also agree with some of the advantages of the first poster. I guess I’m a tweener. Last January, I broke down and bought a Kindle, and I still own it. In fact, one of the books I’m currently reading is on it. I’m tempted to sell it though when I replace it with the Android tablet I plan to buy soon. That way I can still read e-books, but I get the additional functionality of a tablet (minus the e-ink).

Here’s some of my likes, not mentioned by these two posters…

Why I love physical books:

I guess I thought the money I saved (I stupidly thought e-books were cheaper) would offset the cost of the Kindle. Not sure that it has yet, hence why I think a tablet will be the better answer for me.

Which brings me to my prediction: e-books will will endanger the mass market paperback trade not physical books in general.

As mentioned above and by other posters, owning the physical book is something tactile, something you can sense with other senses besides sight. But usually it’s the hardcover books we love to collect. And if it’s possible, get signed. However, it will become more costly to produce these printed books. So, my theory is that books will revert back to what it was like before paperbacks came around–owning a physical book and having a library of them will be a sign of wealth… Mass market paperbacks came about to satisfy the emerging middle class and the literate poor who wanted to read, but couldn’t afford the cover price. And, oddly, the self-pubbed and indie pubs are mimicking the cheaply produced chapbooks and pamphlets that were cranked out by local printers and bookshops toward the end of the 1800s: if you had something to say, you just found someone to do a small print run for you and hawk it on the street or from the bookstall of a bookseller that printed it for you. That ability has now returned, but electronically. Funny how things have come full circle. Perhaps the books that used to just go straight to paperbook, will now just go straight to e-form.

I remember reading recently (but now can’t find the link), that younger people are eschewing e-books and seeing physical books as a chance to escape from the constant use of electronics in their lives.

I also thought e-Readers were more environmentally friendly, but apparently that’s not the case?

What about you? How have you noticed your book buying habits changing?

5 Replies to “Books vs. e-Readers: Both are here to stay”