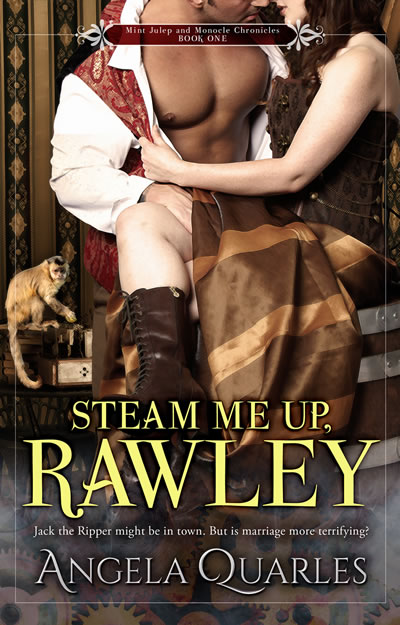 Behold, a book cover too salacious to get an ad on Amazon. I’m not kidding.

Yesterday, Amazon opened up advertising to non-Beta testers whose books are enrolled in KDP Select. For various reasons, I’d decided a week ago to put Steam in KDP Select (for non-authors, this means I decided to make the ebook exclusive to Amazon for 90 days), and I thought I’d try out this new opportunity.

Some early Beta testers are saying it was a total flop for them, but I’ve always been of a mindset that no book’s path is the same as another’s, and I couldn’t know if this wouldn’t work for my target audience unless I tried. Plus, I’d decided to make it super-granular to be sure it was only my target audience that would see it, thereby reducing the chance that a click wouldn’t convert to a sale.

Here were my other arguments for trying it:

So, I chose to show my ad on only 38 books’ product pages whose audience might enjoy my book too. So I selected Gail Carriger’s Parasol Protectorate series, Kristen Callihan’s books, Bec McMaster’s, and Delphine Dryden’s steampunks, etc. I also unchecked the box that would allow Amazon to also show it on books that were similar. The way I figure, that meant my book would only compete with others to appear on the book page of just those 38 books.

Several hours later I got a rejection email saying my cover didn’t meet their advertising guidelines. I can only assume it was this part of the guidelines that flagged my cover: “Overtly provocative imagery such as partial nudity or blatantly sexual prurient content.”

I sent a reply asking: “So a bare-chested guy, which a child can see at the beach or even just seeing anyone jogging or mowing their lawn in the summer, is partial nudity??” I haven’t heard back yet, but someone else suggested that the pose is a little suggestive, and yes it is. It’s supposed to be. But is it “overtly provocative” or “prurient”?

Which brings me to my mini-rant

Why, why, why is sex in a loving relationship “bad” in our society? Why does our society find it okay to allow kids to see violence, but not images with sexual overtones, etc?

My parents were pretty awesome–when I was growing up in the 70s and 80s, nudity and sex weren’t taboo subjects for me. Heck, my mom’s an artist and she let me tag along to sessions where her and her fellow artists had a nude model, etc. Nudity was beautiful. Love was beautiful.

However, violence? No way! So I was the odd child in high school whose parents let them see Rated R movies that had nudity/sex, but Jaws? I still haven’t seen it. It came out when I was of an age where I was still under parental guidance, and since then I just haven’t gotten around to it.

So my book has a woman sitting in a guy’s lap in a playful, suggestive manner, and the amount of man titty (or mipple) is less than you’d see on any given summer day down here in the hot South, and it’s unacceptable to be shown?

On The Passive Guy, a commenter noted that hers was rejected because it had manchest too, but hers was just a surfer. No suggestive pose apparently. So it’s just a bare manchest that’s got their panties in a wad?

The rejection is also illogical

Yesterday, an indie thriller writer reported that hers was rejected and the only thing she can figure is that her cover had some blood spatters. Another author in a private forum quipped that the only thing that sidebar ad pane will be able to show are sea adventure novels and women’s fiction.

What do you think? Leaving aside that this could probably be a big waste of money for an indie author, do you think this type of cover shouldn’t be seen? Did your cover get rejected? If so, for what reason do you think? Feel free to post your rejected cover in the comments so we can get a feel for the range of rejected covers.

ETA: If you’d like to post your rejected cover in the comments, use this code: <img src=”URLofYourImage” width=”150″ />

33 Replies to “So, Apparently My Cover is Too Prurient for an Amazon Ad + Mini Rant”