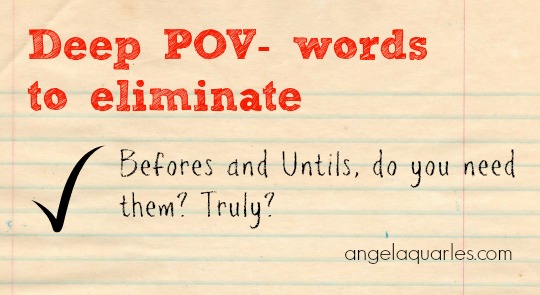 I haven’t done a writing craft post in a loooong time and since I just sent Steam Me Up, Rawley to my copyeditor, these types of considerations are fresh in my mind. For the last week or so, I’d been doing searches for particular words that can signal that my prose is telling. Sometimes I leave it, because telling in that part of the story was what needed to happen (typically at transition points).

First, my standard disclaimer: These are not rules to live and die by. Using ‘before’ and ‘until’ is not wrong, and sometimes it’s exactly what’s needed. Like any craft tip, absorb it and then see if it applies, or not, to your prose and that particular point in your story.

Like many other romance writers, I like to write in what’s called Deep POV, which means we try as hard as we can, in either first or third person POV, to eliminate as many filters and barriers between the reader and the POV character so that the reader can be as immersed as possible. There are a lot of tips and tricks, and some of them are well-trodden in writing craft posts on Deep POV, like eliminating filter phrases, not naming emotions, etc. But I thought I’d dedicate a post to two words that don’t get as much attention: ‘before’ and ‘until’

The potential problem with BEFORE

BEFORE is a word that can cause what Margie Lawson calls a mini speedbump and can be a form of telling when it’s used to describe what the main POV character is doing. It might only take a split second for the reader to parse what you mean, but why make them do this? Instead of moving forward, the reader stops to absorb what happened before something else happened, as if the order wasn’t right to begin with. If you use subject and verbs, in the order it happens, the story moves forward without the reader having to take that micro-pause. Not only that, but as a sentence structure device, it can certainly get overused. I’ve read some books where the author used this all the time, like every paragraph, sometimes even in the same sentence, and it developed into a predictable habit. Especially in action scenes, you want the action to be straightforward and full of power, and loading it down with ‘befores’ and ‘untils’ can make your action scene lose steam.

UNTIL is also another word to look out for, as it often shows up in told prose. It’s a good word to search for because then you can look at what is around it and see if it can be made more active-it’s a good ‘flag’ for possible telling. Oftentimes, it’s putting distance between the reader and the POV character because the narration is subtly telling the reader that the narrator already knows what’s about to happen, instead of dropping them more into the moment. Again, sometimes telling is what you absolutely want to be doing–just make sure that when you’re telling it’s because you’ve made the conscious decision to tell, and not because you accidentally did.

Here’s some examples of sections I revised last week in Steam Me Up, Rawley. These might change even more once they come back from the copyeditor, but here’s how they stand as of now.

She hadn’t realized how hungry she was until she took her first bite.

Okay, several problems here. The word ‘until’ was higher up in my polishing checklist, so I got to this sentence first from that search, but notice that it also has the filter phrase ‘realized’? That is also on my list, so I would’ve gotten to this sentence from that word search too, but I’ve noticed that a lot of times, these words like to hang out together, like they’re all telling buddies or something, like they’re huddling together, sheltering from the fear that they will get nixed on the next Deep POV sweep.

To fix it, I didn’t angst over it too much, as it was not a pivotal scene. It just needed to get the job done, and didn’t need to be told, and could be stronger with a slightly deeper POV. So I switched out the realization that she was hungry to show her taking the first bite and showing that realization instead:

At the first bite, she groaned. So good.

Sparkling, award-winning prose, this isn’t, but the sentence didn’t require fancy. It just needed to be a bit deeper, that’s all.

He angled up toward Dauphin Street, and she waited until he disappeared around the corner before she set off after him.

She peeked around the corner. His tall form weaved through a light crowd.

This is an action scene, so I definitely didn’t want these in there. Notice I had bother words in there. Again, I didn’t belabor the prose when I changed it:

He angled up toward Dauphin Street, and disappeared around the corner.

She scurried to the corner and peeked around. His tall form weaved through a light crowd.

These are just subtle tweaks, that when applied throughout your novel, can help keep the reader submerged in your POV character. A reader might not know why they weren’t fully invested in the characters and story, but chances are, fixing things like this can go a long way to helping.

In this example, I was telling something that didn’t need to be told at that moment. Since she didn’t know what she was about, since this was something she did without thinking, I shouldn’t have the POV character conscious of this.

Before she realized what she was about, she found his hand near hers and clasped it, entwining their fingers.

I simply changed it to this and left the realization to several paragraphs later, when she actually becomes conscious of what she did, and I showed it, instead of saying ‘she realized’:

His hand lay near hers, and she clasped it, entwining their fingers.

These are just small subtle things that can add up to a lot of impact. Yes, it is tedious to do word searches for these, but the payoff is great. Like anything with Deep POV, I don’t worry about this when I’m drafting, only when revising. And I only do this checklist search as the last polishing step before handing it to my copyeditor.

What about you? Do you have any questions? Do you also search for words like this?

11 Replies to “Deep POV: Befores and Untils, do you need them? Truly?”