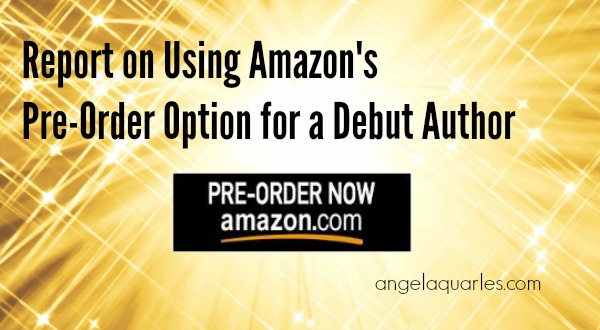 Last night ended the first two weeks of my debut novel’s release, and I thought I’d post some of my thoughts and findings on using the new pre-order option at Amazon.

On August 14th, the news hit the various indie loops that Amazon had opened up the pre-order option for indie authors. Before that, it was only available to traditionally published authors, and to those huge indie successes who had the clout to ask for the option and have it specially coded. I’d already had Must Love Breeches up for pre-order on B&N, Kobo, Apple, GooglePlay, and ARe, so it had been frustrating not having it up on Amazon too. So I immediately picked a go-live date and uploaded my nearly ready file that evening. Several hours later, it was in their system, and I began promoting it the next morning. It enjoyed a brief foray into the Top 100 for Time Travel Romance later that day, for about an hour or two, but after that initial burst of sales, it settled down to just a couple of sales a day. But that was cool to see, especially when I could see if it was a result of any pre-release promo.

Anyway, here’s what I found:

It helped to capture any impulse purchases as a result of any pre-release buzz from people who might have forgotten about it by the time it released. I think this is an important point to consider if you’re a no-name like me. I’ve heard some say that having a pre-order option for someone like me isn’t very beneficial because it’s not like I’m going to make one of the big lists when it releases, and so any pre-order sales are a waste because they won’t impact your sales ranking on Amazon on the day of release. While this is true, I think there’s more to consider.

Let me back up though, and explain what is happening with sales for those that are newer to the process. Pre-order sales affect your sales ranking on Amazon on the day they make the pre-order sale, hence why I briefly made that list the first day. However, the orders are accumulated during this period and don’t count as sales until the day before your release date. This is why big authors like doing pre-orders because all those pre-order sales their name can rack up all get dumped onto their record on release week, making it more likely they can hit the USAToday or NYT bestsellers lists.

So while yes it’s true that all my pre-order sales would never come close to putting me on a list, I’m also pretty sure I wouldn’t have had even half that number of sales if I hadn’t captured them leading up to it. I’m just not a name where someone would mark it on their calendar or sear it into their brain so they wouldn’t forget my release date. LOL, yeah, no. Instead, what was more likely was ‘huh, cool cover, sounds like a good story-click‘ but they would have forgotten about it probably by the time it released. Of course I can’t scientifically test what percentage of my sales were impulse purchases, but my gut tells me, this was good to do.

Also, if you’re only not doing it because you want all your sales to hit on release day so that your sales ranking catapults you onto a list, remember that Amazon rewards those that have consistent sales. A fast rise up the charts, if not accompanied by steady sales after, will plummet you just as quickly, doing you no good. It took a lot of sales on the day of my release to finally pop me into the Top 100, but it did.  Once I got there though, I’ve been able to stay there with just half that number of sales. So, keep in mind that if you’re looking at your respective category chart and see their ranking and use that to judge how many books they’re selling. You need to double that number, it seems, to get you that same spot. The number you’re calculating based on sales rank is how many it takes to stay there.

Allows you to have a firm release date

It was nice having a firm release date. Before that, I was going to play ‘let’s juggle hitting publish buttons’ hoping they’d all release around the same time. With Amazon allowing this, it allowed me to set a firm date, September 3, and update all my pre-release promo with this date. As it was, I still had to do that a little. I hit publish on the print version on Sep 1, cursing myself for waiting too late (their documentation said 3-5 days to update) but it actually worked out almost perfectly as it popped into Amazon on the afternoon of my release date.  I waited until Sep 2 to hit publish on the German distributor site XinXii, and even today, am still waiting for it to populate!

Allows you more visibility on the Hot New Releases list

If your pre-order sales are strong, you’ll appear in your category’s Hot New Releases list, gaining you more visibility. I forgot to check this, but looking at what’s there now and their rankings, I would have been near the top of page 2 for Time Travel. Since the release, I’ve been bouncing between the #5 slot and #8. The cool thing is, you’re on here for 30 days PLUS however many days you were on pre-order, which gives you more exposure.

I can’t remember the number I heard, but I think it was like, after 10 sales, books start appearing in your Also Boughts strip. In the past, you had to wait on release day until you got that number of sales, which could be hard for a debut author. However, because I had preorders, on my release day at midnight, boom, those appeared. I wouldn’t be able to tell if my book also appeared in other strips but it was a possibility.

Some authors have had some horror stories to relate, with reports of glitches in the system. I didn’t have any, and I don’t know if my experience with what happened will be how it plays out in the future, but I thought I’d relate it anyway. When you upload your file, you pick a release date and you have the option of uploading a draft. Amazon then gives you a firm date on which you must upload (and mark) your final. What I mean by ‘mark’ is that there’s a radio button you choose to say whether this is your draft or final. Amazon can’t know that what you’ve uploaded is your final, unless you also click that radio button to tell them this is it. The danger of not doing this in time means you lose your pre-order privileges for a whole year. Just to be safe, I uploaded and marked it as my final two days before the deadline. I found that I was able to keep uploading a new final after that, and it took around 6 hours on average for it to update to the system (they send you an email). But about 4 days prior to my release date, Amazon locked it down and didn’t allow me to make any changes (not even to my description, keywords, or categories). So be sure you have those in final form too.

This is an unknown for me, so if anyone knows the answer, please pipe up in the comments. I know that some lists on Amazon, like the popularity lists, are weighted by the number of overall sales in a given period, and I wonder if, since the sales all get dumped onto the day prior to release, if this counts in that weight consideration? If so, I had two days in a row with nearly equal sales (my release day sales were almost the same as all the pre-order sales that got dumped onto my record for the day before). Not counting those two days, which are naturally going to be a larger burst of sales for people, I’ve been averaging 23 sales a day, and to me, for a debut author, this is baffling! I’m like, who are these people and how do they know about my book??? The steady sales means I’ve been staying up in the lists, which is getting me more visibility, which generates more sales. It’s like magic. Unfortunately, there’s no way to do a controlled experiment to see if this would’ve happened if I hadn’t done the pre-order option… But I do wonder if that weight is helping me.

Having a Buy Link

It was also nice having a buy link ahead of time to have on promo, and also to be able to go ahead and post my book to some website databases, some of which required an Amazon link in order to submit. It also meant that I could reverse engineer a direct link to my Review page (even though people couldn’t leave reviews yet) so that I could put this link into my back matter ahead of time. In other words, your book, on release day, could already have a direct link to leave reviews. It also means, if you have other books out, that you could update that back matter immediately so that you could capture pre-order sales.

For me, I loved having this option and will do it again without hesitation. However, I know some who experienced glitches. One author I know had uploaded her final and yet Amazon suspended her, saying she hadn’t. Last week, pre-order sales reports were frozen and so authors didn’t know if they had any sales. I’m sure these kinks will work out. But if you had any experiences with it that differ from mine, please feel free to share in the comments! Do you see other benefits or drawbacks that I missed?

Just heard from another author that you CANNOT change the date you set for preorder without repercussions. She has a release well outside the 10-day window and changed it from a Monday to a Tuesday when she realized the pre-orders are counted the day before. There was no warning near that field of what would happen if she changed it. When she changed the date, she got an email from Amazon stating that she lost her pre-order privileges for one year, and that an email had been sent to all who had pre-ordered that the release had been delayed.