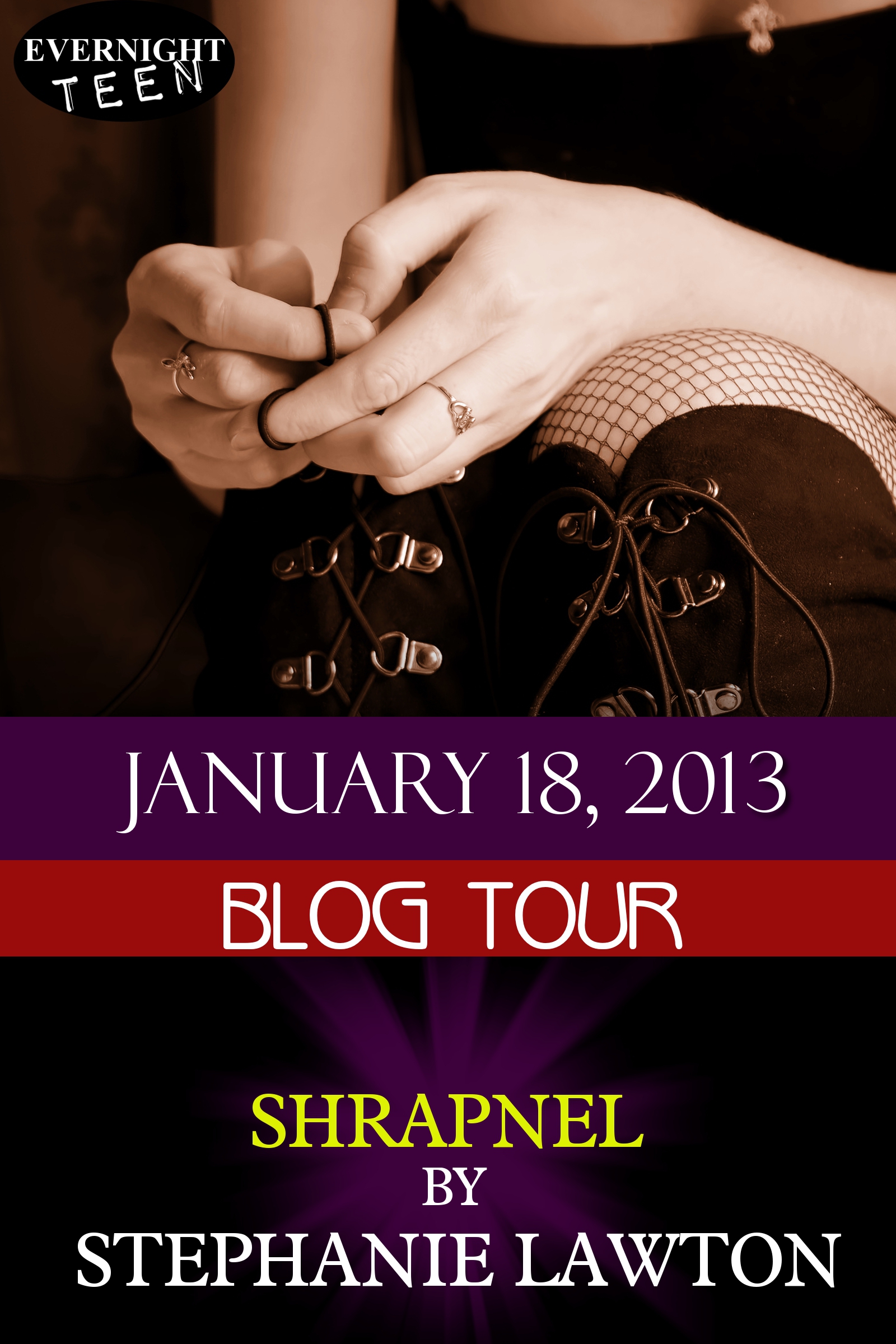 I’m so excited to host my friend Stephanie for her blog tour of her new YA release, SHRAPNEL. I don’t know if she remembers this, but we first “met” on Twitter over this book in the fall of 2011. I’d just joined Twitter and scoured it for local writers and others to follow and found her, among others. She soon tweeted asking for something quick that could be flammable during the Civil War era. I replied with some suggestions and we struck up a convo. She then invited me to the Mobile Writer’s Guild and we’ve since gotten to know each other. Turns out that tweet was for a scene in this book 🙂 This past fall I Beta read an earlier version of it, and oh boy did I love it! It’s just dripping with voice, y’all, and so deliciously atmospheric. (tweet this) I was on the edge of my seat. Seriously!

Anyway, this is a long-winded explanation about why I’m so pleased to have her on my blog today for Book Monday! First lets give you the blurb, so you know what’s going on:

It’s been six years since Dylanie and her family visited a Civil War site and the place came alive with cannon fire. Problem was, no one could hear it but her.

Now she’s sixteen, her dad’s moved out, her mom’s come out of the closet and Dylan’s got a spot on Paranormal Teen, a reality TV show filming at historic Oakleigh Mansion. She’ll spend a weekend with two other psychic teens—Jake and Ashley—learning how to control her abilities.

None of them realized how much their emotional baggage would put them at the mercy of Oakleigh’s resident spirits, or that they’d find themselves pawns in the 150-year-old battle for the South’s legendary Confederate gold. Each must conquer their personal ghosts to face down Jackson, a seductive spirit who will do anything to protect the gold’s current location and avenge a heinous attack that destroyed his family.

Intrigued yet? I’m now turning it over to Stephanie for more SHRAPNEL!

Angela and I have many things in common, which is part of why I’m so excited to be on her blog today. Not only do we live in the same city, but we’re on the board of our local writers guild together. We both write quirky, strong heroines, and we both love a bit of humor mixed in with our steamy stuff.

Below is an excerpt from Shrapnel, my upper-YA mutt of a novel set at Oakleigh Mansion in Mobile, Alabama. Dylanie is a foul-mouthed tomboy, but making an attempt at being girlie. Her helper is a smarmy Civil War-era ghost named Jackson. Here, she’s seeing her new look for the first time.

I’m not prepared for what I see. Standing in front of me is … a girl. A noise makes me turn. My Army bag has fallen over and the contents are spread out on the bed, almost like someone rifled through them. Closest to me are my brush and the make-up bag Mom doesn’t know I own. She’d probably break into song and dance if she did.

“Okay, Jackson, I get the hint.” He doesn’t appear, but he’s here somewhere. Ten minutes later my hair’s under control, I’ve managed to smudge on some color without looking like a clown, and I have to admit, I look a little bad-ass. Like a girl, but in a don’t-screw-with-me kind of way. I reach for my red Converses. Just as I’m about to tug on the first one, the door on the right side of the ugly wardrobe swings open on a squeaky hinge. I chuckle when I see what’s inside.

“Are you kidding me? What are the odds that they’re my size? They’ll probably crumble into dust if I even touch them.”

“You doubt me?” Jackson’s sudden appearance sends me stumbling backward.

“You can’t just do that! You scared the shit out of me.”

“I wouldn’t have to appear if you were a good girl and did as you were told.”

I grit my teeth while weighing my options. My earlier urge to injure him loses to my need to say, I told you so.

“Fine.” I march over to the wardrobe and yank out the musty, old boots, ignoring Jackson’s lazy grin that sends my stomach into a tailspin. Except … the boots aren’t musty. Yeah, they look old, but they’re in perfect condition. The leather is supple and shiny, and the laces have been replaced with smooth, black ribbons. I don’t know whether to wear them or worship them.

Jackson makes up my mind for me when he scoots me onto the bed and lifts my foot onto his knee. I chuckle, thinking of the old man with a bad comb-over at the children’s shoe store close to our house. He used to kneel and place our feet on his knee, too, when fitting us for a new pair. I’d stare at the top of his shiny head and the greasy strips of hair carefully gelled into place.

“Hmmm.” Jackson loosens the laces then tips the boot so I can slip in my toes. He maneuvers it until my foot and calve are perfectly encased in black leather. His fingers linger at the back of my knee.

“Perhaps,” he says as he tugs the ribbons tight. “Other foot.”

He repeats the process, but this time he doesn’t release my leg when he finishes. “Lovely,” he breathes, then shakes his head as if to clear it. “Are you ready to go downstairs?”

“Give them a try.” Jackson takes my hand and pulls me off the bed so I’m standing on two-inch heels, a far cry from the flat Chucks I’m used to. The boots are surprisingly comfortable. “Stand up straight, shoulders back.”

He smirks. “Now walk.” I feel like a horse being led around a ring as Jackson keeps me steady. “Don’t lock your knees. Use them to help you walk naturally, heel to toe.”

After a few adjustments, I’ve got the hang of it. “Like this?”

“Mmm, excellent.” I swear his dead eyes just got warmer. Is that possible? Something tells me that isn’t the kind of thing I can ask Riley. His raises my hand to his lips and leaves a small kiss that sends tingles all the way up my bare arm and beyond. “I think you’re ready, sweetheart. Do not forget to pay attention to what you learn today. I’ll be nearby.”

“Yeah? That’s pretty damn creepy, you know.” My heart begins pumping out a cocktail of Oh, crap when he crosses his arms and stares at me. Guess that was the wrong thing to say. As the seconds stretch out, I count my blinks. After six, he still hasn’t broken eye contact. My toes wiggle inside my boots. Then my leg starts bouncing. “Okay, maybe not creepy. Maybe protective is more like it. Or concerned. Or, I don’t know, sweet? You know it was just a joke, right? I always say stupid, sarcastic stuff.”

Jackson takes a deep, unnecessary breath. “Is that how I appear to you, creepy?”

“Well, you are dead.” He nods. “And you can appear and disappear whenever you want.” He nods again, so I keep prodding. “And you can … um, touch me. Even though you’re not real. So yeah, that qualifies as creepy.”

I watch, mesmerized, as a crooked grin slowly softens his face. “And yet you’re not running for the door, pulling out your hair and screaming like a hysterical schoolgirl.”

“No, um, that would be—” I point in the direction of Ashley’s room.

Jackson rewards me with a genuine laugh. “And that is why I chose you, not her. I can’t promise I won’t be creepy, but hopefully I can be a number of other things to you, as well.” He takes a step toward me, while I take a step back. “Intriguing, perhaps? Helpful?” He eyes my boots and takes another step closer. “Educational, even?”

His eyes land on my lips, and even a novice like me can tell where this is headed. 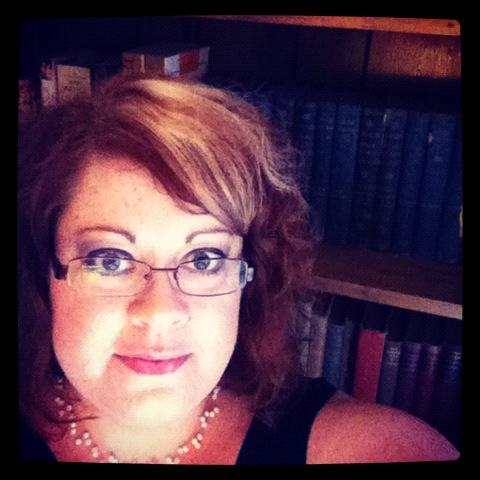 Where To Find Stephanie:

Where to get your paws on SHRAPNEL: