Today I’m going to share a little personal journey and how it affected my writing in case it might inspire you to become… GASP… a morning person!

I’m in my mid-40s now, and I only share that so that you understand how long I’ve NOT been a morning person. In fact, I was one of those that stared at those chipper morning people with a curl of the lip and total incomprehension (you mean you choose to wake up earlier than you have to??). I was notorious for missing morning classes in college and I usually tried to escape that fate by never even scheduling one before noon, if I could manage it. In fact, at one point, in order to make sure I stopped hitting snooze until it gave up, I had to place the alarm clock clear across the room. I was the Snooze Queen all the way up until a year ago. It wasn’t unknown for me to set it for one hour earlier than need be just so I could have time to hit the snooze button. I know, that doesn’t make any sense, but there it is.

I can’t stress enough how much I hated mornings and wanted to squeeze out just ten more minutes of blissful sleep. But it used to annoy me when morning people would get pissed at me as if I were lazy. I mean, I was up far later than them doing stuff and I’m not talking about the occasional hangover type I-hate-mornings because I was up too late partying, I mean like reading, creating, brainstorming, what have you. I was more productive in the evenings, it seemed, and I just wanted my eight hours of sleep, dangit, just like they got because they went to bed early. Jeez.

Anyway, that all changed a year ago today when this happened, courtesy of a visiting cousin who found them abandoned: 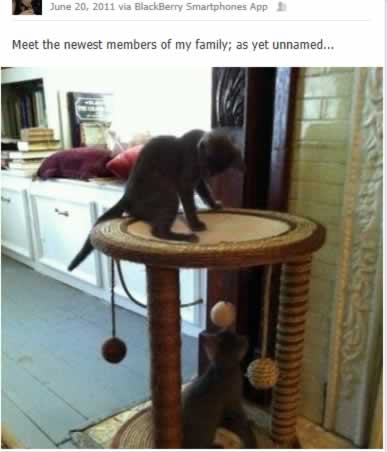 The irony is, I started waking up early and became a morning person precisely because I wanted to avoid this:

I absolutely did NOT want to have Alarm Clock Kittehs, because, you know, I valued my sleep so highly. So I trained them not to be and the result: WIN for my writing! Basically I figured that if they learned that I awoke only when my alarm rang and not because of paws in faces, meows or anything else, they’d eventually get it. I also didn’t feed them when I first got up. And remember when I said I already had my clock set an hour early to give me time to hit snooze for an hour? Well, I didn’t change it from 8 a.m. for some reason that I don’t rightly remember. So I pretended to sleep from about 6 (or whatever ungodly time the kittehs had to play roller derby on my person) until the alarm rang and I’d bound up like nobody’s business, trying to give off vibes that THIS is what gets me up, that noise you just heard, evil kittehs. And believe it or not, it worked. They might still accidentally wake me up on occasion because they decided to play, but they don’t do it with intention like I’ve heard of other cats doing so they can be fed and petted. Yay!

Anyway, I started using that extra time to do things and it was a revelation for me that I could enjoy a leisurely cup of tea and get things done before I had to go to work. Weird. Also that scratchy/fuzzy-eye feeling which made me think I had to hit snooze to appease it? It goes away! Who knew. One thing you need to know is that I don’t drink coffee, so I have to wake up naturally.

Later in the summer, I got really involved in critiquecircle.com and started using that extra time critting on that site. I then decided to set my alarm for GASP 7:30 to give me more time to crit. This came in handy when I started to blog and tweet in September. I devoted that free time to my writing career and haven’t looked back.

Recently, I took Candace Havens Fast Draft class and used that time to knock out a chunk of my daily quota. I blogged about the FastDraft experience a couple of weeks ago. On day 2 I realized that 7:30 wasn’t enough time, so I set my clock for 7:00 and that extra half hour really helped. I also discovered something shocking–I came up with more creative stuff in the morning than I did at night! And I always had believed I was at my most creative in the evenings!

Class has been over since the end of May, and I’m still waking up at 7 and devoting that time to my writing career, be it writing, querying, reading blogs, revising, critting, what have you.

Not too long ago, I was on the receiving end of the lip curl/stare of incomprehension when I told someone about this new behavior of mine. They looked at me and cut me off to impart that, No, they really liked their sleep, they couldn’t possibly do this. They then went on to explain how much and I’m nodding, thinking, yes yes, I used to be that way too, but the person didn’t believe me. She really thinks she somehow likes her sleep more than I do. I never did get a chance to explain. Oh well.

I’ve also discovered some other side effects. Twice my alarm hasn’t gone off, and now when I wake up in a panic it’s not 10 minutes before I have to be at work. I still have TIME. It also came in handy at my first writer’s conference when I was assigned 9 am slots for pitching. I didn’t bat an eye. For RWA, I actually CHOSE morning slots! Whoah.

What about you? Have you converted? Do you have a set time you devote to writing?

24 Replies to “Ack! I’m One of THOSE Now–How I Trained Myself to be a Morning Person…”