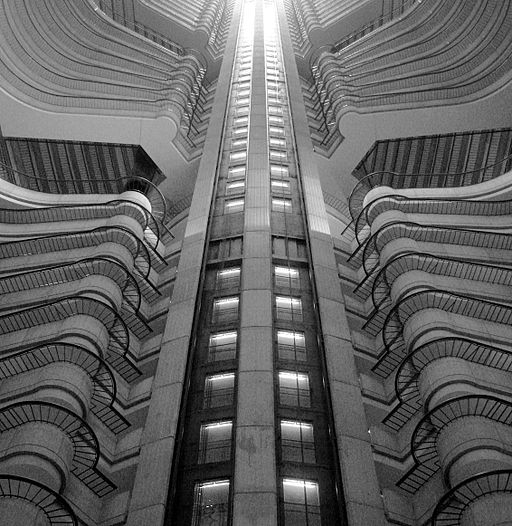 Two weeks away, folks! I thought I’d do a quick little tour of the Marriott so that you’ll feel a little more at home there when you arrive. I’ve been attending Dragon*Con since 2005 and this hotel is one of the host hotels so I know it very well. The hitch might be that my observations are going to be based on experiencing the hotel while it is literally wall-to-wall people, which I doubt will be the case this time.

First of all, this is a beautiful hotel. The view upwards from the Atrium level to all the floors is amazing.

Since the room assignments haven’t been made, I won’t be able to get specific, but hopefully I can give you a general idea.

If you enter from the front entrance, you’ll be at the Lobby level, which is, of course, where you’ll check in (see, aren’t you glad you have me to help out?) Seriously though, it’s hard to know whether you’ll need to know this level much more than that. There is a Starbucks here, but the lines could be long, so you might want to pack your own Keurig (though the rooms come with a coffeemaker, I think, can’t remember). Next to it is the M Store, which is kind of like an airport store–I can’t remember all it has, but you’ll find some food there, like pre-made sandwiches, fruit, magazines, incidentals, and the like. Again, the line could be long. If you have time, I suggest using the skybridge to take you to the CVS in the Peachtree Center Food Court. Back at the Lobby level is also the Spa and Health Club.  There are some meeting rooms there, so we may have workshops there, who knows.

Now, from the Lobby level, you can take the escalators up or down. I’m going to guess that a lot of our activities are going to be one level down (Marquis Level) because there’s a concentration of ballrooms and meeting rooms there and it wouldn’t make us all spread out. Hopefully that’s where we’ll mostly be (conference event wise). One thing to note, is that toward the back there is a skybridge that will take you to The Hilton. I mention this, because in the lower level of the Hilton is Trader Vic’s tiki bar, an Atlanta institution. At the back of the Lobby level, there’s also a set of escalators that can take you back up to the Lobby level, or one level down to the International level, but I’d be surprised if we have stuff there, but you never know (watch that this will be where we end up, LOL…) On the International Level, you can also exit to Courtland Street and The Hilton will be directly across the street.

Okay, let’s take the escalators back up to the Lobby level, and then go up one more floor. Near the front entrance, the escalators will spill you out into a nice wide promenade area, which overlooks the entrance. If you take a left, that whole left side is the Atrium ballroom. Hard to know if the awards banquet will be there or in the other ballrooms on the Marquis Level, but there it is, just in case. At the escalators, if you take a right, there’s a large sculpture of a sail sitting on top of their Atrium bar, called Pulse. In front of it are lots of booths and square cushy seats, and this is a great spot to meet for drinks and socialize. But it’s not great for privacy, if that’s what you’re wanting. It’s an open plan, so it’s ideal for said socializing as well as people watching. If you keep heading to the right and then back just a tad, there’s High Velocity, which is their sports bar. It’s a little more private there, and so the energy level will be a little lower here.

Okay, let’s keep heading back, going past High Velocity, and angling back toward the front entrance. From here, you can go up some steps to the Pulse Loft, which overlooks the escalators and the promenade and Pulse bar.

Behind this (so kinda directly over the front entrance) is a set of bathrooms. Also, there are exits here if you need to smoke, and the stairs also take you down to where all the cars pull up to the entrance. Anyway, back at the bathrooms–go past that and on the left and right are entrances to two different skybridges. Before we take those, if you go past that, you’ll find more conference rooms, in case we have some there.

Okay, at the skybridge entrances. The one on the left will take you to Marquis Tower I and from there you can take the skybridge to the Peachtree Center Food Court. Lots and lots of food options here, from regular dining to fast food (as well as the CVS). The right hand entrance will take you to Marquis Tower II and the Suntrust Food Court. I’ve actually never been there, so can’t tell you what it’s like, but I think it’s smaller. But also from there, you can take the skybridge to the Hyatt Regency, if you want, which has a nice sports bar located directly where the skybridge spills you out. This might be a good spot if you need to meet where other conference goers won’t be around you. Also, if you’re a smoker, there’s a balcony right off of there where you can do your business.

Let’s zip back to Pulse bar (yay!) and if you head along the right-hand side you’ll find Sear bar and Sear Restaurant, which will probably be even more low-key. Past that is another set of bathrooms, and then the pool! Also, there’s a set of stairs that will take you down to the Lobby level.

In the center of all this, is the bank of elevators, which are glass-enclosed. The elevators are arranged by floors, so find the bank that services your floor, and you’re in business.

If you want to see floor plans, which oddly can’t be found on their site (except for the International Level), visit this page on Dragon*Con’s website and then click on the tab “Hotel Floor Plans”. It even has a PDF you can download. Handy, huh?

Anyway, hope this helps! Have fun and see you in Atlanta!

13 Replies to “RWA Countdown: A Primer on the Marriott Marquis”