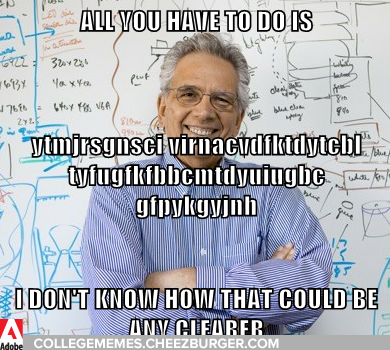 Are you a romance writer? Then you’ve heard this said, I’m sure. Romance is a formula, it’s easy to write or It’s easier to get published in Romance.

Sometimes I just want to give the big eff you to those who maintain this. It chaps me to no end, because I’ve been working my tail off for years to hone my craft. I must be an idiot then and doing something wrong. Most of the time I’ve only seen this attitude online; I’m lucky that I have a very supportive circle of family and friends who know how hard I’ve worked, so typically the only time I’ve run across this is when I’m introduced to someone new, or occasionally on a non-romance forum.

Like this email I got after I signed with my agent back in October. She congratulated me, but then went on to remind me that it’s just a first step to getting published (yeah, I didn’t know that, thanks) and then she said this:

I know nothing about Romance writing, but I have heard (perhaps it’s just an urban myth) you can get into publication a lot faster. Since most people wait years to see a book in print, I think inking a deal where your book could be out in 12-18 months is pretty amazing sounding. I can understand why so many people go self publishing, (one of my only romance writing pals went that route) at some point you’re just hungry to get stuff out there.

Is it just me, or does this come across weird? I don’t think she meant to come across backhanded. Given that the forum was all about landing an agent, it felt like it was also saying in a way that I’d gotten one easier than her and the others because I’m writing Romance (I was one of very few on that site). This could just be me. But anyway, I thought I’d explore this a little and then open it up to discussion.

Why is Romance judged by the worst in its genre and not its best?

I work in a bookstore and see this attitude, though I’ve also experienced it elsewhere. Horror is judged by its greats like Stephen King and Dean Koontz. Science Fiction by the likes of Asimov, Bradbury, Herbert, P.K. Dick, and Heinlein. But romance? Actually it’s not judged by its greats, typically, because usually the ones making fun of it have never even read a single book in the genre. Yes, there’s bad romance, but there’s also bad horror and bad science fiction, bad fantasy. I’m sorry, but there is. And while there are some who make fun of sf/fantasy (and judged it by its worst by folks who’ve never read it also) , it doesn’t seem to be as pervasive. I see people proudly walking up to that section of the store. It’s also not denigrated by the owners and they stock it well. The Romance section? It’s gotten better since I started, but it’s still the red-headed step child and stocked with just whatever they happen to find marked romance. Patrons also approach it less boldly.

It’s a formula. The endings are the same.

Yes, romances have to end with a Happily Ever After or a Happily For Now, but Mysteries have to end with the murder solved by the protagonist, Suspense/Thrillers with the good guy overcoming the bad guy, etc. And I’ll maintain that it’s hard writing a novel where the end is already known and still make the reader suspend their disbelief and think that maybe, just this once, it won’t happen, or make them wonder how it could possibly happen.

Since it’s got the biggest market share, it’s easier to get published

As Romance Writer’s of Australia points out in this post: “It’s harder than most people think. Even Mills and Boon, that urban myth claims is so easy to ‘crack’, receive something like 20,000 unsolicited manuscripts each year from all over the world. They contract perhaps 30 new writers. They’re just one of the publishers.”

Because it’s such a large share, there’s more writers, so I’m thinking the percentage of those that get traditionally published is still small.

And I know some very talented romance writers who’ve not yet landed an agent. I don’t have statistics handy, but I know that agents who represent romance only accept a handful of new clients a year.  Just take a look at these stats by agent Kristin Nelson, whose agency is one of the heavy hitters in our genre– out of 32,000+ queries they signed 16 new clients. (And they represent more than just Romance).

This is true. Romance leads the way in indie publishing, and many small publishers have come into existence to help feed the demand for books in this genre. There are more of these than there are if you write science fiction or horror, and if you write literary fiction? Tiny. But remember, there’s also more of us writing this genre, so we’re still competing against others to get those e-publishing contracts. I’ll come out and admit that BEER AND GROPING IN LAS VEGAS was rejected by some of these, so it’s not a case of if you write a romance it’ll automatically get published by an e-publisher, which I think nay-sayers believe.

And on a final note, writing convincing emotion is extremely difficult, at least for me it is. It’s necessary to have it in this genre, but oh so hard to pull off without delving into schlocky-land or over-the-top land.

But, I know this sounds like this bothers me a lot. It really doesn’t. I just shrug it off and keep working hard. I mainly wanted to write this to put this out there and start a discussion.

What are some of the attitudes you’ve heard that have made you a little twitchy?

25 Replies to “Writer Wednesday: Is Writing Romance Easy? Is It Easier to Get Published?”