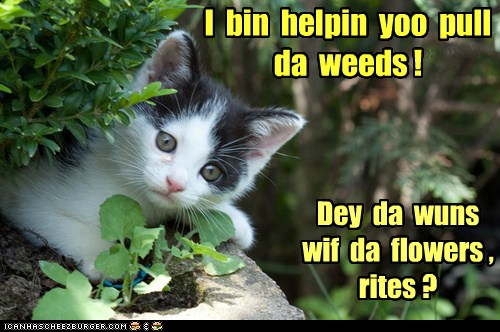 I’m now a Plantser (someone between a Plotter and Pantser), but for MUST LOVE BREECHES I pantsed it all the way, baby! (Pantser refers to someone who writes by the seat of their pants with no pre-plotting). Anyway, that means there’s LOTS more work on the revision side (one of the reasons I tried pre-plotting STEAM ME UP, RAWLEY).

Today I want to focus on those little seeds you plant while you’re pantsing, because sometimes they surprise you and grow into wonderful expressions of theme, or subtext, or great twists in plot. But then there are those seeds you plant, with the same kind of hopefulness, that just… well, sprout up as distracting weeds, hiding your characterization, plot, theme and more.

The problem comes in the early stages of revisions in that some of those weeds don’t look like weeds yet. Just like real weeds where you hover over the unidentified green sprout, pondering if you should yank it out–what if it’s a …? You do the same when reading and rereading your WIP. Some you even cultivate, realizing their potential and you’re quite pleased with your subconscious. Some you tweak a little and even beef it up, hoping it will work.

But the old adage is so true: setting your WIP aside is essential to discovering what really needs to stay. I hadn’t read MLB through since probably May? I’d stopped my querying and sent it out for another round of Beta reading and over the summer I’ve made some revisions. I’m now rereading for revision smudge (thank you Janice Hardy for that apt phrase) and also just trimming and analyzing everything as to whether it needs to be there.

And boy has that break helped me see things that needed yanking! I thought I’d share one such section I came across this week to serve as an illustration of what I mean by a pantsed seed that grew into a weed.

I had a reflective/passage of time scene early on where the heroine wakes in a panic because she can’t remember who the President of the US would be in 1834 (she’s traveled back in time) and she might be expected to know it. So she methodically gets out pen and paper and works forward from Jefferson and backward from Lincoln and works it out, but it gave her a little scare. Anyway, it was something that obviously sprang to mind as something that one might panic about and so I wrote it into my first draft (seed). Maybe someone discovers her list! And she’s having to explain how she knows of future events! None of that ended up happening when the first draft was completed. On revisions, I liked how it revealed a bit about her situation and her methodical side, but I recognized that it needed to have more relevance and so had it come back in a later scene where Mrs. Somerville (who is sheltering her) is confronting her about something else and the heroine sees it’s visible and it ups the tension in the scene. Will Mrs. S see it?

Well, no, she doesn’t. And in this last pass, having let my manuscript lie fallow for several months, I had the distance to see this little element for what it is–a weed. Yank! Nothing ever comes of that list and that extra bit I added in revision to justify the existence of the initial seed was false tension since nothing happens. It cluttered up two scenes and added about 300 words to my MS. That might not seem like a lot, but anything that doesn’t serve the purpose of your story only adds clutter. And readers don’t want clutter.

I think the moral is: yes, it really DOES pay to let your manuscript sit, the longer the better, even though you really, really, really want to send your baby out into the world. Resist. There could be weeds lurking in it.

What do you think? Have you experienced something similar during revision? How did you recognize it for what it is?

9 Replies to “Pull Out Those Pantsed Weeds in Your WIP”