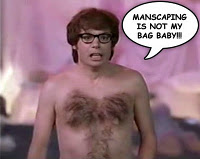 Or at least eliminate enough of the suckers so they’re not populating your manuscript like the wiry hairs on a hirsute male.

Argh! As my fingers poise over my keyboard, I hesitate. Recently, I’ve become loathe to point out style advice like this when critiquing because this might be someone’s style. In fact, my fingers hesitated so much, I just returned to writing this after taking a 2 hour procrastinating tour around twitter and klout. Sigh. Okay, getting over it. Onward.

So, what do I mean by to-be verbs? These are any time we use is, am, are, was, were, be, being, and been in constructing our sentences. These verbs indicate a state of being, which is important to remember when applying this guideline because sometimes what we really want to illustrate is movement, not a persistent state. But! There are times when we DO want to indicate a state of being and using a to-be verb rocks (like the to-be I used in the second sentence of this paragraph).

Like any writing tip, this is a guideline only. Not a rule. You should only write what resonates with you.

In case you do want to see how it might improve your story, here are some structures to look out for in your WIP:

There are probably other structures where this pesky guy shows up, but these should get you started. The point is to be aware of it and really scrutinize whether it captures your character or scene. Sometimes it does! Or it would be very strange to convert it. Or that’s the voice of your character. Or it fits the rhythm. But if you’re getting feedback that your prose is lackluster, consider going on a fishing expedition through your WIP. Sometimes it will be really hard to find another way to say it (at least it is for me!) but when I finally do, it pops! And generally characterizes my heroine or hero in a much better way. I’m offering this tip precisely because I still struggle with it and didn’t find a heck of a lot of practical advice out there, other than don’t use it. I liked Shirley Jump’s example (tip #2) in her article Show Not Tell: What the Heck is that Anyway?

And in case you thought I wrote the opening sentence for shock value, I really did have a purpose. Some people really like overly hairy men, who am I to judge? Same with writing guidelines like this. If it works for you, do it, otherwise don’t; leave the hairs in, or pluck ’em.

How about you? Do you struggle like me trying to convert to-be verbs? Do you have other tips for helping to eliminate them where advisable?

I tried applying this tip to this blog post when I came back to revise it. Sometimes I succeeded, sometimes not. For instance, what’s a better way to say these phrases?

8 Replies to “Writing Tip: Is your WIP in need of some manscaping? Pluck out those to-be verbs.”