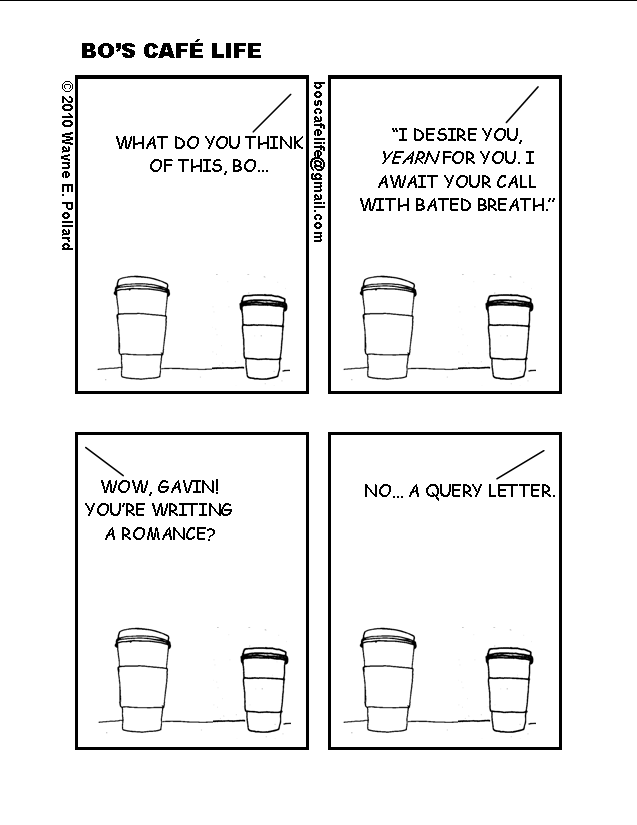 I’ve been a baaad girl with blogging, so I thought I’d dip my toes back in slowly, with maybe a post a week. So to start off, I thought I’d share a presentation I did recently at my local writer’s group on writing queries, divided into digestible weekly installments.

For today, we’ll cover: Purpose, and When to Start since it seems like most blog topics on the subject of query writing cover the nuts and bolts of the letter itself (which I’ll get to as well).

Purpose of a Query

I know you probably think this is self-evident, but I see a lot of people in forums get hung up on this. It’s ONLY purpose is to make an agent request material. That’s it. It’s not some undertaking where you need to distill the plot of your book, give your life story, show all the cool worldbuilding you came up with, tell them all about your characters, etc.

Just get in and get out.

It’s a marketing tool. You just want to intrigue them! But not by telling them what a great writer you are, etc. Not that kind of marketing/sales pitch. Think Back Cover Blurb

If we’re talking about writing the query itself, anytime during the writing process for your novel is a great time to start. For instance:

Why? No better test to see if you have a central conflict, theme and plot! If you can’t get it down into a nutshell, your novel has a problem, not your query. Better to discover this at this stage, than halfway through your query process and you’ve blown through most of your A-list. (And remember, this means you can’t query them again for this MS, even if you do revise it, unless they ask specifically for a revise and resubmit)

Use it as a revision tool and your manuscript will be stronger, and you’ll have a smoother query process.

I began in earnest to study and work on my query several months before my MS was ready. I used the ‘set-aside’ time, between major drafts, to do this.

But when to send it out?

Not until you’ve finished not only revising your novel, but also copy edited and polished and it’s abso-fricking-lutely ready for an agent to see. I had several agents request a FULL the same day I sent the queries! Agents (in general) are acting quicker now if they’re interested. Some are still slooow. But the smart agents (and don’t you want a smart one?) know they have to act quick.

I say this because I’ve had writers tell me they query before they’ve even written the first draft because they want to see if it’s got any interest. Don’t do this. If you’re thinking you’re wasting your time pouring your energy into a book only to have it not picked up, don’t. All that time is time well spent in honing your craft. So it doesn’t work out–move onto the next one with some stronger writing skills under your belt. I’ve also had a writer tell me she was thinking of querying while her book was with the editor she hired because she heard that agents can take a while to answer back so she wanted to telescope the process. That might have been true earlier, but, as I said above, agents are acting faster now. When I landed my agent, that first week I had fulls and partials being requested the same day. By the next week, I had a partial converted to a full, and I think it was only a week and a half after I started that I had my first offer. I ended up with three offers, and one common refrain from all three was how polished it was.

And that’s it for this week. Next week I’ll talk about elements of a successful query and some do’s and don’ts.

What about you? Are you querying yet? Have you tried writing a query as a revision tool?